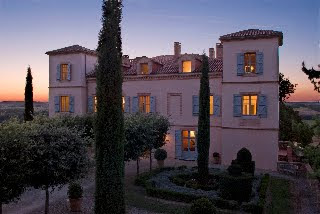 Chateau Dumas: 1800-2010
by Lizzie Ezekiel
The details of Chateau Dumas’ 13th century origins are a little sketchy, but we know quite a lot about life at the Chateau in the 19th century.
In the early 1800’s, Baron Henri de Cruzy, Marquis de Marcillac, and his wife, Leonie Vialette de Mortarieu, lived at the Chateau with their 4 children: Marie, Elisabeth, Gaston and Marguerite. They seem to be a mismatched couple. Leonie was pious, rose every morning at 6am to help at Mass and embroidered religious capes with gold thread in her spare time. Henri in the meantime gambled away the 10 tenant farms on his property (Leonie bought 4 of them back!) and hunted in the forest with his friend Charles Durieu, a bachelor who “preferred a pleasant mistress to a detestable wife”.
Their resident staff included Mathilde the cook, Jean the coachman, Marie-Girard the chambermaid, Antonin the gardener and Mariosou his wife and Poncet, the groom in whose arms Henri died. The wet nurse Calinou Lagane lived in Auty and came just when needed.
Son Gaston took over the Chateau when Henri died. He married Edith de Cambolas, a stylish and beautiful woman who was “never ready on time, always late”. She was keen to preserve her figure and climbed the stairs ten times a day in order to preserve her flat stomach (tried that and it doesn't work!).
Gaston donated a parcel of land for the construction of the church in Auty. The vicar baptised the bells Francois and Renee after Gaston’s godfather, Francois and godmother, Renee de Cruzy.
Ownership of the Chateau changed hands several times during the 20th century. At one time it belonged to an Italian family, then it was a pig farm and at one point it nearly became an old people's home. It was finally rescued by the Constantins, a Parisien family who fell in love with it and devoted 13 years to its restoration. Robert Constantin, a talented artist, adorned the walls with trompe l'oeil designs (still there!).
And now of course there's us, an English family with French connections whose aim is to celebrate the beauty of Chateau Dumas by sharing it with others. I hope you are able to come visit this summer with French General - we are planning a week of inspiration and local flavor - I'll hold you a room!
Posted by Kaari Marie

Oh wow, Kaari! What a wonderful story. Thank you for sharing. I would love to see the interior of that place. Maybe some photos in the future? An old people's home, really? Glad the family saved it!

Thanks for the interesting story ....we didn't know the funny detail about the stairs!
the Baron de Cruzy marcillac and his wife are well known in our family!
Amaury de CAMBOLAS