The Document: Close Up 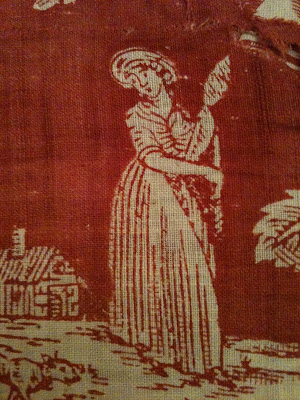 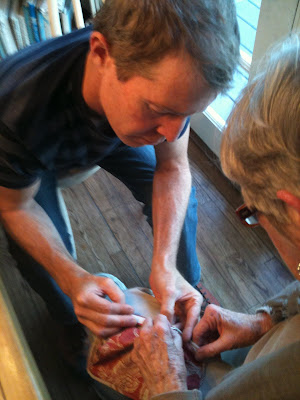 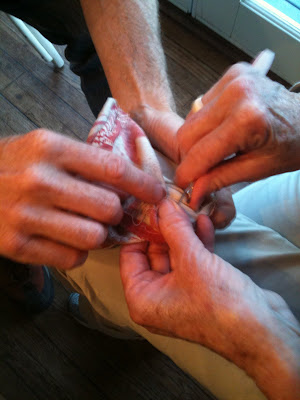 There is something about finding an old textile and then getting other people excited about it.
Years ago, I bought an old pincushion from my friend Polly Lyster in England. It's simple design and old faded red color have made it one of my favorites. This past Spring we decided that the lady depicted on the toile scene would make a great design for a rubber stamp, so we set to work dissecting the textile. We needed to separate the front of the cushion from the piping so that we could get a good flat image. We had no idea how old the piece was and soon realized that it was practically shredding in our hands. It literally took two people, mom and brother John to hold the piece together while one of them carefully unstitched the seams. In the end, we ended up with not only a wonderful 18th century rural countrywoman design, but an elegant flower design as well. 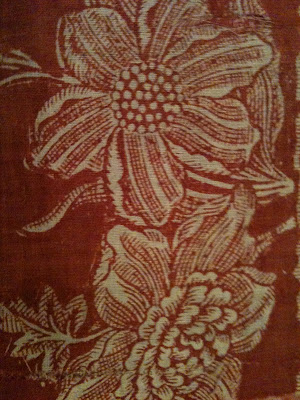 Then there was the quilt we bought in France this summer- I say we because a group of us went in on it and decided to cut it up! After much head shaking and many ghasts, I convinced four women that we should cut it into fourths and each take a small piece of this amazing print. Nilda set to work cutting it up and decided she needed two pieces, so Alyse was out, and Cathy and I each got our quarter...although I had to promise Alyse I would send her a few yards once I reprinted the design! 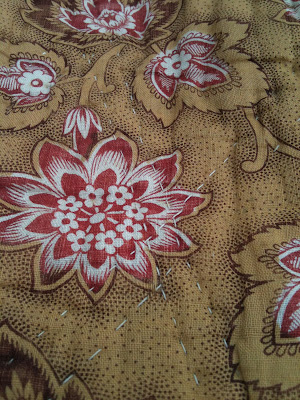 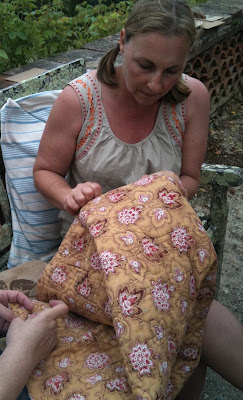 Once we each had our own piece, we realized that the backing, the blue and red paisley was just as beautiful as the front of the quilt. So, once again, many hands set to work dissecting the quilt - we literally took out each stitch to remove the batting so we could get the better side of the paisley - which had probably been block printed over 200 years ago - but looked as if it was printed yesterday - it was so bright and vivid. 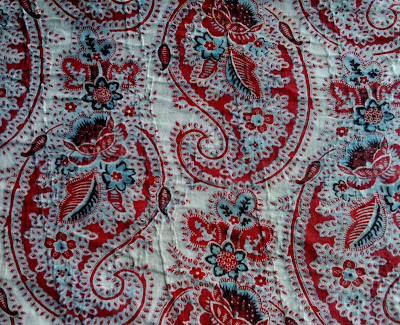 Sometimes I think we could all be textile conservators if we had nothing else to do - document textiles, when looked at closer, tell such good stories!

such amazing fabric! I really like the paisley. Hope you have fun with it.

Good heavens....so incredibly lovely! I think i need to start carrying your amazing fabric. I sent several women to your store last few weeks in search of something better after they came to me disappointed in the selection at Diamond Foam. More and more are wanting new fabrics in the way of the old designs. I can think of no other who masters this perfectly than FG!