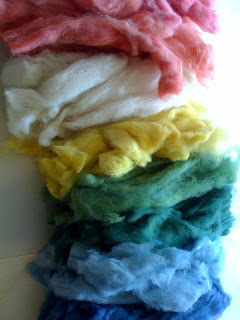 A few months ago, I took a needle felting class at Reform School - here in Los Angeles. I had no idea what I was in for. I learned that needle felting was a process originally developed for making industrial felt. To achieve this, you move a barbed needle in and out of loose woolen fiber to create a matted felt fabric. Everyone in the class was able to reach into their three dimensional mind and create small animals - I was so impressed. I ended up felting a small strawberry emory. I stabbed myself three or four times and eventually found myself getting into the sync of the process and learned to stab the wool instead - but not too hard - it's a light touch.
I am making up our chateau craft bags this week and have decided to add needle felting to the kit. I picked up some vegetable dyed alpaca wool and divided it up into small bags, included a few needles and a piece of foam. If all else fails on this adventure, at least we will have crafts to keep us company! For a quick giveaway - before I leave - I thought I would send out one of our needle felting kits. I was thinking this bunch of wool would make beautiful felted flowers or beads....what's your idea?
Posted by Kaari Marie

Beautiful and excellent for flowers and leaves- maybe a small brooch for a bag or well loved sweater?

A journal cover would be lovely or a pin cushion. The Paris trip sounds really lovely! They are some lucky ladies!!

I agree- some type of little (easy to accomplish!) embellishment would be nice. A small flower is perfect and could be used in many different ways---a brooch, a cell phone case adornment, a hair accessory, a ring top, a pecil topper!

Number 1 answer: I am a serious crafter I felt wool in my sheep..I mean sleep. I wake up and find the most amazing creations. Then I have a cup of coffee in my felted wool cup and start felting awake...I amaze even my modest self what I am able to do! I even felted the very key board I am typing on now, tho it's getting a little itchy with the warmer weather. Number 2 answer: I have never felted wool and find crafting daunting. I love all things vintage tho, and would probably use those beautiful pieces of wool as part of a vintage design project. Please don't ask me to explain that.... p.s. I have never seen Sheep in those colors! Ha!

it is so ironic that you posted this today and that i came and read it. i have been wanting to give this craft a try for a while now and just felt intimidated. thanks for sharing your story. i am thinking a flower also. or maybe a few small flowers to form a mini bouquet.

I have been enjoying felting lately as well. I have made simple little hearts and flowers to include in my etsy sales, when I have time to make them that is! I find the only problem is that I have to watch what I am doing, rather than, say, a french film where I might have to read some of it... Do NOT look away! :)
Have a fabulous weekend,
xo

What a delightful idea! How about
felting butterflies, other insects,
and fruit! Or, perhaps creating a
family portrait pillow made up of
paperdoll style people embellished
and enlivened by colorful fabrics and little details sewn on later with French knots or satin stitches. The family figures could then to stitched to a felt
background and made into a pillow.

I was recently watching a program on TV about needle felting, and they made a small Japanese style doll which was very cute. But they also made small felted beads for a bracelet. Some were round, some oval, and some square, in many colors. They used a big needle to poke a hole in the middle to string them together. Some bracelets were left plain, and to others they added beads and other fun things. They were quite clever. If I knew where to get the supplies I would love to try it! Flowers also sound lovely.

I agree, flowers in those colors would be beautiful. Don't you love Reform School? Jenny's doing such a great job with the classes. I took an embroidery class and it was wonderful. I'm so excited to see your new space, too.

P.S. If, miracle of miracles, I do win, here's my e-mail address: teresaannpfister AT hotmail DOT com

I am fascinated by felted wool and what can be created with it. I would definitely try to make a floral embellishment for something, be it a jacket or a hat.

The chateau trip is a dream come true. Enjoy every minute!

Add trim to a wool sweater or a felt flower to a pair of my daughter's mittens.

That wool looks just yummy and the colors!!! LOVE IT!! Have a great trip, it sounds like a lot of fun
Mary

I've been looking through a number of Japanese books that show needle felted confections...like petit fours and chocolate cake. If I had these fibers I would try to make some fanciful cupcakes with icing flowers and swirls. They say we should all be on high fiber diets,
font-ils pas ????

(French courtesy of Babelfish.com...in case it says something completely different than I had intended.)

Definitely for a botanical motif!

Ohhhh, I want to learn how to needle felt! I would love you forever if I won! I just finished my 14th year teaching adorable 8 yr olds and this would be a fun summer time project. xoxo-Karen E.

I just found your blog and store. I have never felted, but it intrigues me. Maybe somewhere down the road...

I am working on felting a little cardinal bird for my dad for Father's Day! It is really so far just a round like red ball :) Have a wonderful Getaway!

I think that I would felt a religious inspired icon, perhaps make up a saint for artists using a Giotto type flat rendering and then let the felted process give it depth, and I would make the piece as if it were a small vertical banner and when it was completed I would stain it a little as if it were very old and rare and I found it at a tag sale, a real treasure. I'd use French General notions as trims around the piece, beads and milagros and then I'd hang it up where my friends could see it and be oh so secretly jealous.

I have always wanted to try needle felting! The colors are wonderful!If you haven't picked a winner, I would love to join in! I think felted flowers are beautiful, love them with a vintage button center!
karen...
recycledrita.blogspot.com

With a vintage button it would make an adorable bellyband-style (or wraparound) closure for a journal! I'd love that!!
http://jennifercarrolldesigns.com/

a beautiful flower pin definitly! and maybe some beading added to it or an old vintage clip on earring that has lost it's partner could now become the center of the flower...oh the possibilities :)

I've tried needle felting but haven't gotten the hang of it yet - and I keep meaning to try again. I've been knit felting for a few years now and love the magic of wool felt. I think that I would try to make multicolored beads and then embellish them with tiny seed beads like the ones I saw at Art and Soul last year.

I'd love to needle felt fruits & veggies with lavender in the middle - it would smell like Provence!

what a great idea. jewelry such as pins or beads for bracelets

ooh I would love to win these and make a butterfly pendent :) Thanks for the opportunity, love your blog, Zoe :)

Oh goodness, I hope I'm not too late for the giveaway. Here's my idea; a menagerie of simple felted birds. Rainbow colored birds would be adorable strung on a string and worn as a necklace, maybe intertwined with some knobby wooden beads even to change the birds-on-a-wire look to a birds-on-a-branch look. Or if you really want to get technical you could felt a little chateau.
Have fun!

Oh, this is something that I have been wanting to try. I would like to make a flower brooch and pin it to a denim jacket or a totebag.

Beautiful colors! I have been wanting to experiment with felting. Erin

i would needle felt me a husband!

Needle felting is soooo much fun. I've been making little cup and saucers, tiny nests...enjoy! Your colors are beautiful.