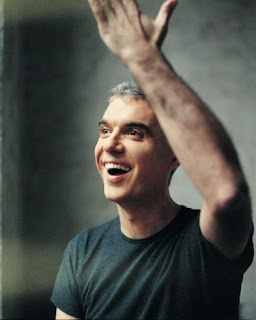 I have a deep admiration for people who are really good at what they do - I am easily moved to tears at the theatre, during a film, listening to a concert...even watching the Olympics. But, I'm not easily smitten by people - in fact, very few people actually impress me.
David Byrne is an exception. I am so taken with him - I think it's because I have been listening to him since I was a kid and I am still in awe at what he is producing.
He just released a new album, Strange Overtones, with another amazing talent, Brian Eno, and, once again, I am so impressed.
I also love the way they are marketing the album. No big, fancy hype - just good, old word of mouth. Here's what David had to say:
"I’m also wondering whether the web-curious will allow news of the album to spread more or less by itself. In the past, I might have undertaken all kinds of expensive marketing plans to prepare for a record release: there would be a teaser, live shows, posters, magazine ads, interviews, and advance CDs sent to writers and reviewers. We’ve done a few interviews, but that’s about it. It will be interesting to see if audiences find out about this song — and the record — without all those marketing techniques, and solely through Internet word-of-mouth."
Molly turned me on to David's journal where you can download his new song and read about his comings and goings - and maybe even listen to his current play list....he's numero uno in my book.
Posted by Kaari Marie

and that's THE cutest photo of him! did you get tkts to the concert? you can come see him in SF if you want...

Oh yes, it's an amazing album. So far I've only heard a few of the songs but I am very taken with them - especially Home. And I have downloaded Strange Overtones as well.

Jette/Denmark who've just discovered your blog. It's looks a treat!