This is a true story...but I couldn't change the names or faces...because they make the story!
This past summer while at the chateau we had a guest that suddenly had to leave mid-week, much to our unhappiness, as we had become totally smitten with our new friend from Savannah.   On the departure day, Mogull (as always) quickly offered to drive our guest to the Toulouse Airport, about 45 minutes away from the chateau.
We should have known that things were going to go a little haywire when her car wouldn't start - this, by the way, was her third car in less than 2 weeks...the first two had to be exchanged for technical problems.  So, Mogull jumped in my car, the trusty Renault, which had an empty gas tank. "Don't worry Mogull," I said, "you will be able to get to Montauban to fill up the tank - no problem."  Fifteen minutes later, I received the call - "We filled up the tank in Montauban, but the car stalled - we are on the side of a very busy road - help!" 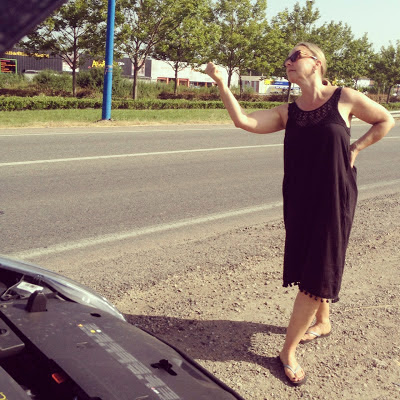 our first idea...didn't pan out too well

So, Christopher, our trusted man-about-the-chateau and I jumped into his car and off we went to rescue the girls on the side of the road.  When we got there, our new friend jumped into Christopher's car and off they sped to the Toulouse Airport...hoping to make her flight.
Meanwhile, Mogull and I tried to figure out the problem.  "You did fill it up with gas - right?"  "Yes, yes, yes, we filled it up - and all was fine until it just kinda sputtered out less than 3 blocks from the gas station."  "Hmmm....and you put in diesel...right?"  "Yeah, yeah, yeah sans plomb - diesel - right?"
At that point I wasn't totally sure...was diesel sans plomb or could it be gazole??  "Well, let's call Eurocar and get the mechanic or tow truck out here right away."  The temperature was rising, the day before had been 104 degrees, and we had no water in the car.
I called Eurocar and was put on hold, then I called back, but the French woman from Eurocar couldn't quite make out what I was explaining to her - that we were stuck on the side of a very busy road in a stalled car and needed help - asap!
I called Eurocar again and this time spoke with a very nice young Frenchman, who, after hearing my whole story a couple of times, with the word DANGER thrown in a few times for good measure, said "First of all..." I hung onto every word, first of all....what??  We are coming to rescue you, we will be bringing you another car, we are so sorry for yet another technical difficulty with one of our cars....?
"First of all....take care"
Take care?  First of all - take care??  What in the world did he think we were doing??  Mogull and I laughed so hard I thought we were going to pass out - right there in the overheated car with cars whizzing by at 100 miles per hour!
Eventually we composed ourselves and were able to continue our conversation with the nice young Frenchman.  Within about 15 minutes, our tow truck pulled up and we thought the drama was over...little did we know it was only just beginning!
The mechanic who spoke no English, immediately diagnosed the problem:  wrong kind of gas was put into the car.  At that moment, we learned a valuable lesson....diesel cars get filled up with gazole and unleaded cars get filled up with sans plomb.  (Reread that sentence if you are traveling to Europe and plan on renting a car.)  The mechanic hitched our car up to the back of his chains and loaded the car up onto his flatbed and then, motioning to the front of his cab, basically said "Get in."  At this point, I had to try to explain to him that we just couldn't "get in" - we had already called my sister Molly and she was on her way, right now, to pick us up.  Due to a mishap earlier in the week, we knew that if we were not where we said we were going to be - there would be hell to pay!  We continued to plead our case to the mechanic, and even brought the young Frenchman from Eurocar, who was still on the phone, into the conversation (heated exchange?). 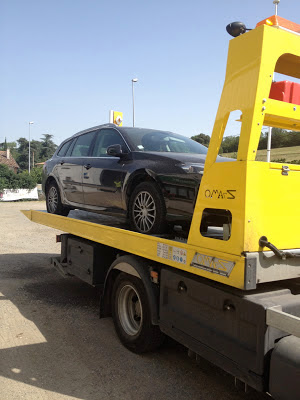 the car on the flatbed

Before we knew what was happening, the mechanic was reversing the ramp on his flat bed and our car was being taken off.  "Wait a minute!!  You can't take our car off - we need you to help us!"  And that's when he basically told us that if we didn't get into his truck right this minute, he would unload our car and leave us, and our car on the side of the road.  That was the turning point, I gave Mogull a bit of a shove and said "Get in!"  I figured Molly would have to check her cell phone at some point and realize that we had no other choice than to comply with the rules of the road and our mechanic!  That's another story.... 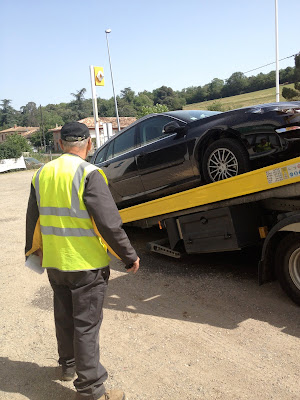 the car coming off the flatbed 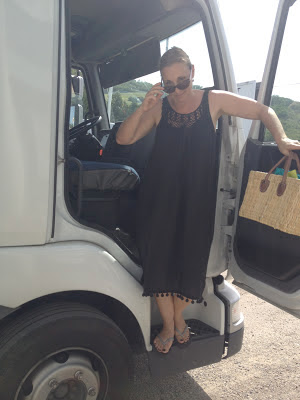 Mogull begrudgingly getting into the cab of the truck

From here, the story gets better...and worse!  Barrelling down the country roads, the three of us, Mogull, myself and the mechanic, all got along like a house on fire - strange since minutes earlier we were yelling and shouting on the side of the road.  The mechanic said his garage was about an hour away...at which point Mogull and I nudged each other and thought "What in the world have we gotten ourselves into??"
Eventually, we pulled up to his garage and were met by the mechanic's wife who invited us into their service shop, which was spotless and air conditioned!  She offered us cold drinks and maybe even some cookies...it was like we had died and gone to heaven.  She said they would have to pump the full tank of sans plomb and the estimate was about $250!  After about a half an hour, the wife told us we should go to the cafe next door (which reminded me of something out of the movie Bagdad Cafe) because it would be a while till the car was ready. 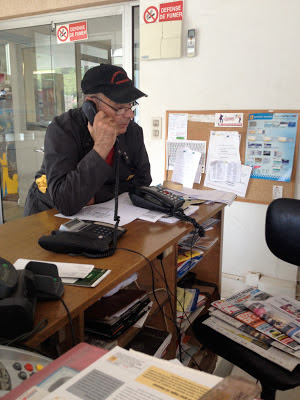 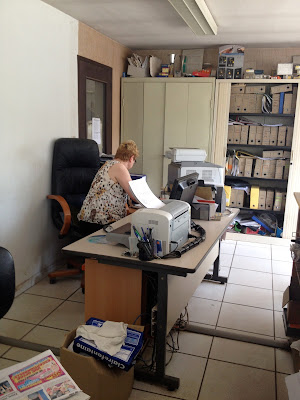 We obediently walked to the cafe and ordered a much needed cafe au lait.  Through the window, we saw the mechanic taking two full gas containers across the street and we snickered about how he was probably selling off our mistake for a profit!  We laughed, we told stories, we tried to figure out a way to not let everyone know that it was a gas mistake!
Eventually, we headed back to the garage, where, since it was noon, the gate was closed and locked.  Of course it was...when the French eat lunch...everything closes down.  All of a sudden the gates magically opened and we were let in. 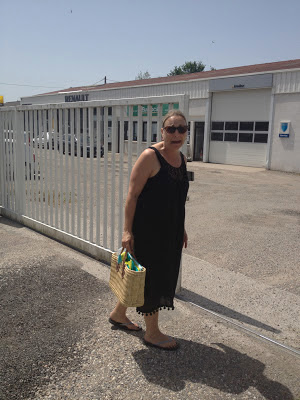 the shop gate opening for us to collect our car

We entered the service shop and the wife and mechanic were there behind the counter, eating lunch.
We were handed our bill for less than $100 and told that the mechanic had siphoned out the sans plomb, filled up the tank with gazole and given us a credit for the gas he had sold off to the gas station across the street.  What??  So...many lessons were learned...but probably, most importantly...if you have to go through a car break down in the middle of France, on one of the hottest days of the summer...best to have a friend like Mogull to go through it with you!
Posted by Kaari Marie 9 comments:

What in the World Have You Been Doing?

I have never taken such a long break from my blog before...but I guess I needed it!  In the past month I have been all over and filled myself creatively with some wonderful experiences and ideas...here is just a peek at what I have been up to... 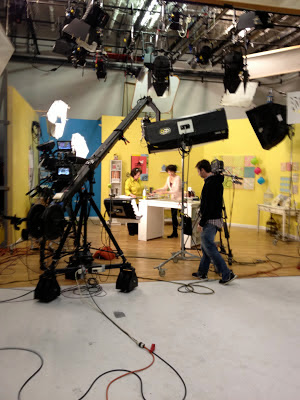 I flew back to Cleveland, Ohio to tape an episode of The Spotted Canary, featuring our paper arts line with Jolee's Boutique...look for it on your local PBS channel in January! 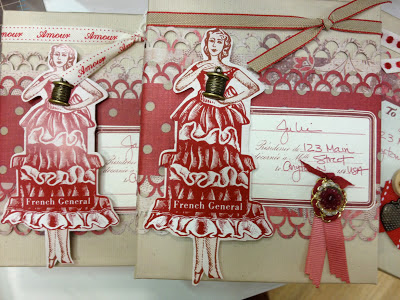 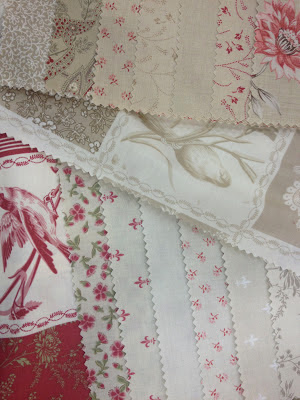 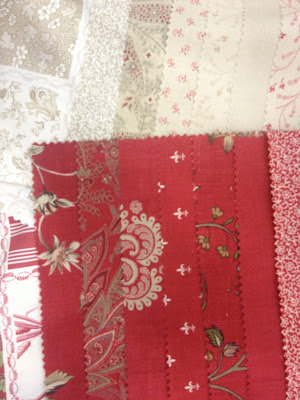 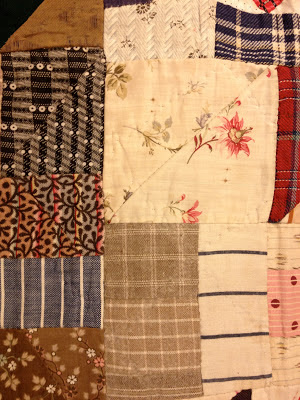 I also  picked up a couple of antique quilts - one filled with small designs - perfect for our ditsy prints! 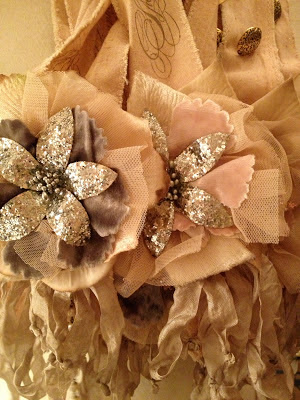 Back in California, I drove out to the historic Langham Huntington Hotel where I taught at The Gilded Life's event, Spellbound. 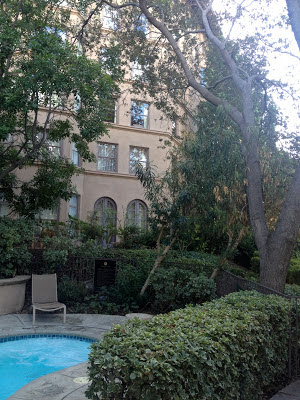 Staying at the hotel for three nights was like being on a holiday in a faraway land...it was magical! 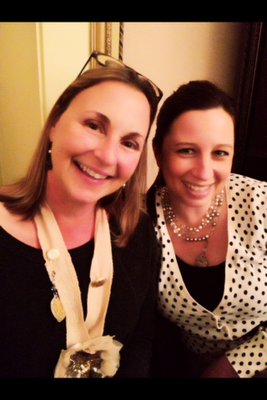 I got the chance to see some of my very favorite people - and they just seem to be getting younger all the time...hmm.... 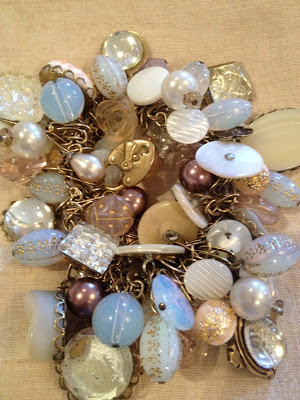 At the Spellbound Event, I taught two classes - a beaded cuff with a yard of chain and 72 charms... 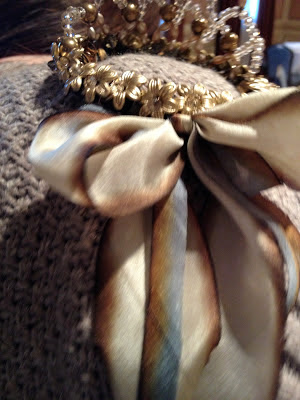 and a flower and crystal petite crown, with beautiful hand-dyed ribbons from Hanah Silk tied on the back! 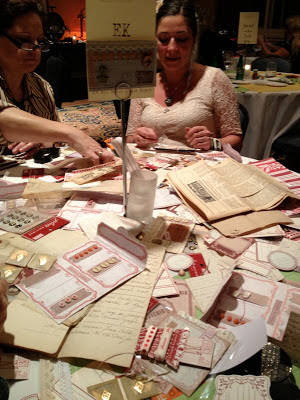 We also stayed "up all night" crafting with a box of French General paper arts supplied by Jolee's Boutique...it was an over the top night and everyone was crafted out by the end of the event! 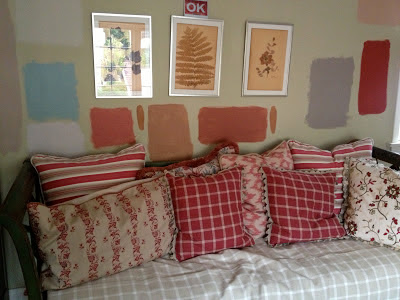 Then, back to Los Angeles where I started the long and arduous process of painting the interior of our home for a photo shoot with Fabricut. 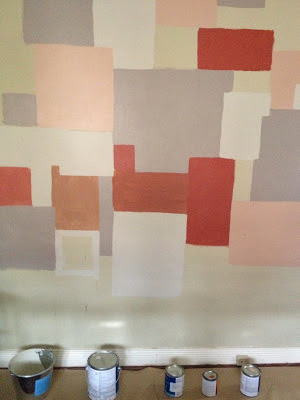 Many days and colors later.... 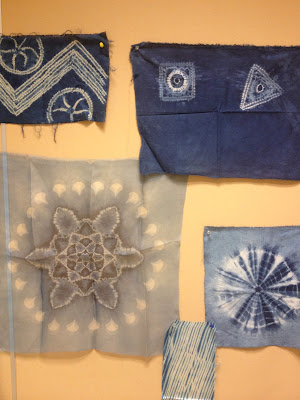 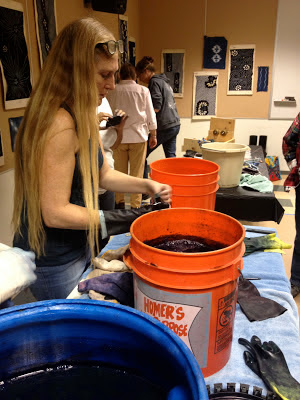 I have taken Glennis's classes before, and I always end up totally inspired and filled with new ideas.... 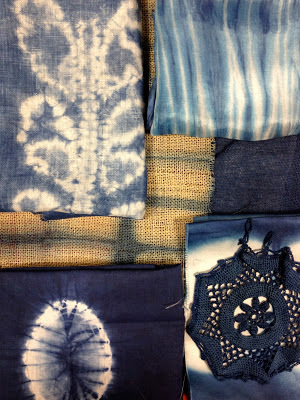 A small selection at some of the techniques and colors from the class - her next class is in April if you are interested. 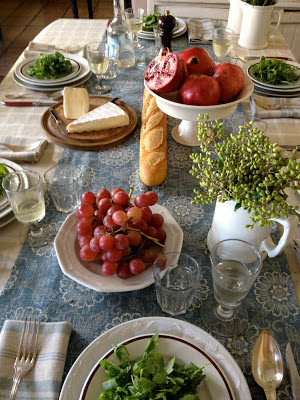 Back to the photo shoot...here's a peek at the dining room set up with some of the new fabric we designed for Fabricut. 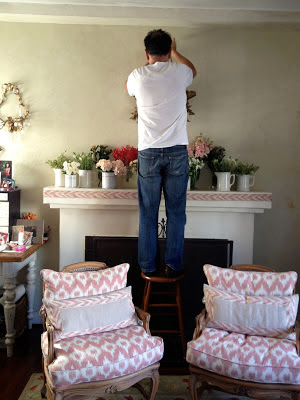 JZ hanging and rehanging photos, pictures, carvings and anything else we could find to make our home look like an 18th century house in France...rather than a Spanish home built in 1930! 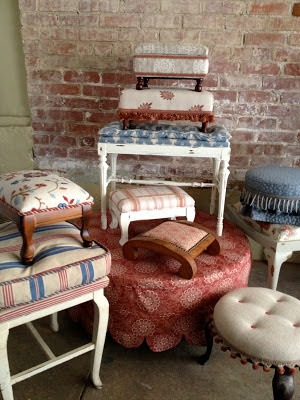 Footstools found in Tulsa and covered in our new fabric. 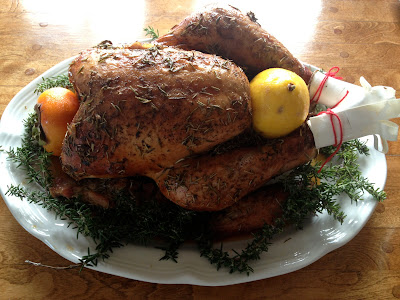 Finally, home to Palos Verdes for a long weekend to celebrate the holiday with family!  Hope you all enjoyed a lovely holiday weekend and are recharged and ready for the upcoming season...