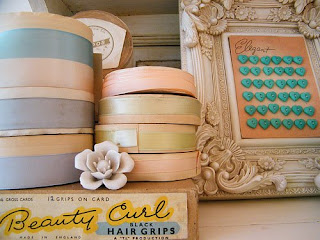 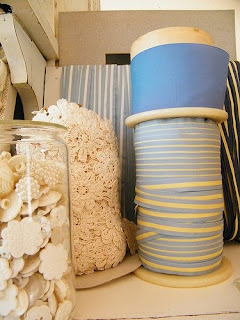 About a week ago, I received a note from Neville! I had been trying to contact him for years and it seemed he had fallen off of the face of the earth. He wrote that he had discovered an old two-story warehouse in Johannesburg that was filled with tons of old stock - ribbon, notions and millinery...would I be interested in seeing what he had found? Um, YES! So here are just a few shots of some of the beauties Neville and Sharon have uncovered. Neville's daughter, Sara, is making up small beauties with all of the old trim that she's offering at her etsy site - Lucky You!
Now I patiently wait for a box to arrive from Johannesburg - I imagine it will be brimming with old colors and textures and all sorts of things that have been tucked away in South Africa since the 1930's....what could be more romantic?? To see Neville's home, look here. To see inside his mind, look here and here.
Posted by Kaari Marie 15 comments: 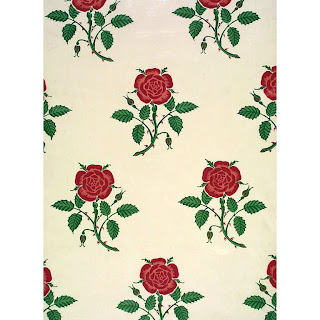 Last August, as I was working away in the shop, there was a knock at the door around 3:00. I was working with Casandra, and I told her that I would see who it was and let them know we were just about to sit down and finally eat our lunch. Maybe they could come back later? It turned out to be Cheryl and Lissa from Moda Fabrics and the very talented Joanna from Fig Tree and Co.
They looked around a bit and then somebody finally said, "You know, we should work together!" - at that point we all sat down at the back table in the notion room and began plotting out how FG was going to start designing fabric for Moda.
That was over six months ago, and finally, on Friday, I saw the fruits of our labor! Over 50 scraps of printed florals and solids came in a large overnight envelope - I had to quickly sort through each one and determine which ones I loved and which ones I could live without. We had given Moda all sorts of small scraps of inspiration and color ideas and they had taken the old French rural look and ran with it. I wasn't sure if they would be able to really make new fabric look and feel old - as if it had been around forever. I am happy to report that they can! Some of the samples looked identical to the 100 year old pieces we had given them.  Although not home decorating fabric, Moda has printed one pattern, our Oiseaux Bleu, on a 56" wide enzymed washed cotton - in thee color ways: red, pink and chocolate. The rest of the fabrics are 44" wide cotton - perfect for crafts, quilts and clothing! I didn't have much time with the fabric swatches - I had to pack them up and return them so they could go back to Japan and be tweaked a bit - to make the colors perfect. The fabrics will premiere in Pittsburgh at the International Quilt Market in May and be available in sewing and quilting shops around the world in the Fall.
And to think I almost didn't open the door that day in August!
Posted by Kaari Marie 21 comments: 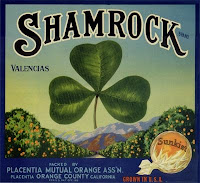 Sounds like everyone is busy crafting! Marilee, you'd better get ready to craft a bit more - you are the lucky winner of our charm necklace kit. Please send me your address and we'll ship a kit right out. You'll be happy to know, this necklace also has a large shamrock charm, just like your grandmother's necklace!
Posted by Kaari Marie 2 comments: 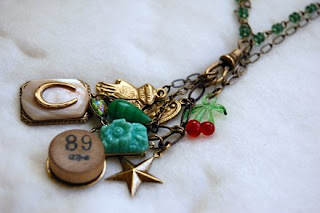 If you live in the Los Angeles area and have been wanting to take one of our beading classes - I am teaching one this week at the new and improved Reform School in Silverlake, Friday night from 7-10. Since we are right around the corner form St. Patrick's Day, I thought a lucky charm necklace would fit the bill. Full of old good luck amulets and prairie green beads, this necklace will be a lucky charm to wear for years. There are still a few spots left in the class - call today and reserve (323 906-8660) if you are interested!
If you can't make it to the class, leave a comment on what craft you are mastering these days and we'll pick a lucky winner to receive a good luck necklace kit. Bonne chance!
Posted by Kaari Marie 37 comments: 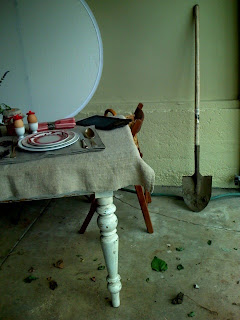 We recently finished our fourth book, Handmade Soirees. After months of propping, crafting, writing, food propping and table setting - we're done. Everything went pretty smoothly - as books go - our only glitch came when shooting the cover. I know I shouldn't judge a book by its' cover - but I often do. I want the cover to tell me the story of what's inside - the good stuff. We shot and re-shot ideas for the cover - nothing seemed to work just right. Finally, we let go and thought - it'll be alright - a little of this and a little of that - maybe a bit of magic book dust thrown in too...it will be fine. So - now we wait. A book takes almost one year from the time we begin till we see it in the bookstores. Normally, I would lay awake at night worrying about what if we had shot that idea outside, or why didn't I use the striped tablecloth instead of the hemp one? Details. No time to worry this time - we've already begun Book No. 5 - our look inside Tinsel Trading's basement. I am already starting to think about the cover!
Posted by Kaari Marie 4 comments:

Buying out of the Boot 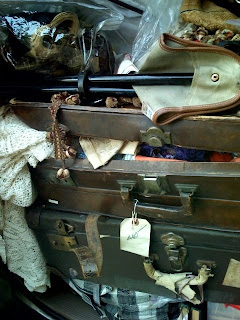 Not many people are lucky enough to have a vendor that pulls their car right up your driveway and lets you dig in. Rochelle drives her caravan (or van) to FG about once a month and lets me rifle through her suitcases of old French fabric, passamenterie and silver luggage tags. Underneath layers and layers of old boxes and bags, Rochelle has a very sophisticated collection of 18th and 19th century home decorating inspiration. This past week I found a length of silk ribbon samples sewn together- Victorian? - maybe a little earlier; a scrap of red Toile de Mulhouse from Alsace, France; and a pile of colorful, old prints (plates) of men's costumes and accessories - they are "Incroyables et merveilleuses"! Since each one is different - I won't be able to sell them online (too much work) but if you are interested, come by FG someday and you can choose your favorite one. 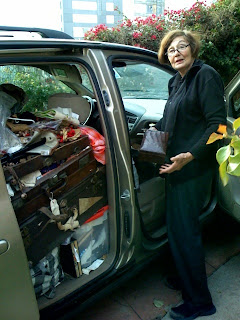 Rochelle doesn't sell everything in the van - which is a little maddening when I finally dig out an amazing pair of Aubusson tapestries. Actually what she said was, "You can't afford those" and she's probably right - I like the scraps of old fabric that look like it got caught under a tire and then chewed by a goat...which is kinda what these Aubussons looked like - sans the goat chewing. After I took this photo of Rochelle, she said "Oh, you're going to make me look like a crazy woman!" and then we both just laughed! Vendors - they are crazy and colorful and I am lucky to work with some of the best!
Posted by Kaari Marie 12 comments:

And the Winner Is... 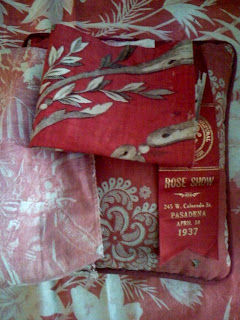 After tallying up all of the votes in our Scrap Beauty Contest, our winner is....Pants Pants Revolution!  It seems that everyone really appreciated the time and effort that Susan Elliott put into her project.  She not only made a scrap beauty but she involved all nine of her nieces in the process - and by the looks of it - they had as much fun as she did!  Read more about Susan's entry here- it is a whole story in itself.
Thank you to everyone who participated - I had great fun opening up each package that arrived and learning all about your creative scrap beauties.
Susan - we will send out your gift certificate and a copy of Home Sewn today!
Posted by Kaari Marie 1 comment: 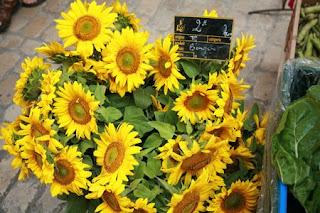 Thank you to all who have shown interest in escaping to the south of France this summer!  Our trip has been confirmed - so far twelve women have signed up and decided to throw caution to the wind and live the life of a French country woman.   I am sending out confirmation letters today along with a rooster badge - thought this might be a good way to be recognized at the airport or train station!
If you are still thinking about the trip, please let me know - we have a few spots left and would love to have you join us!  Here is another look at the charming Chateau Dumas - the 18th century home we will be sharing July 4th - July 11th, 2009.
Posted by Kaari Marie 4 comments:
Newer Posts Older Posts Home
Subscribe to: Posts (Atom)