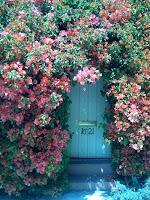 I planted this bougainvilla vine 5 years ago when we moved into the little Spanish bungalow which houses French General. It has grown out of control - in a good way - almost growing over the front door. It has also grown over the French General logo which was painted onto the house. I used to have a gardener, named Anselmo who would come and trim away the vines so that there was a quaint floral entryway - but Anselmo quit almost a year ago and no one has trimmed the vine since! Sooner or later we will have no front door.
Posted by Kaari Marie

no front door? just the way we like it!