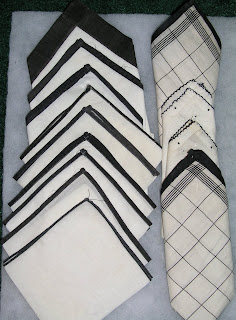 I am normally not a big fan of the color black. In fact, I didn't even know it was a color until my friend Megan (I think we were 5 or 6) told me her favorite color was black. Odd...I thought.
But.... I collect mourning paraphernalia - which seems like a contradiction, but color collections know no boundaries.
First, I started collecting mourning stationery - the paper cards that were sent out after a woman had lost her husband - the width of black ink around the border of the card denoted the length of time one had been in mourning - the wider the band the closer to death. Eventually a woman would write all of her correspondence on a card with a very narrow band of black ink around the edge - I guess so everyone else knew she was in mourning - for the rest of her life. I've just started collecting mourning handkerchiefs - which were probably used mostly by women - again lots of different widths of black to show how long a woman had been in this dark period. I love how the mourning period was turned into a fashion culture. What about the woven hair lockets? Or buttons made with photos of the dearly departed? Maybe my favorite are the jet buttons that were sewn onto their mourning attire. Those clever Victorians.
My favorite old bead dealer just unearthed a box full of glass mourning buttons - on cards. If in need or curious, leave us your name and Sofia will draw a lucky winner out of an old hat on Friday.
Posted by Kaari Marie

I had no idea there was ever such a thing!

Okay Kaari, I'm curious! I've never run across mourning buttons but I love to collect funeral cabinet cards and such. I guess I love that stuff because my father was a funeral director and mortician and all of us children grew up on the side of the funeral home. It was fun though everyone thought we were weird.
And don't panic...but MY favorite color IS black too! Not for the mourning but for it's slimming and timeless classy-ness :)
Happy New Year Kaari~
everything vintage

I've never heard of Mourning Paraphernalia, but I guess anything can be a collectible! I do like the graphic-ness (is that a word?) of the black and white.
xo
jeanne

Well now we just get boobs and a young boyfriend, right? I would far rather have mourning buttons. Robin

I knew about mourning stationary and handkerchiefs, but I did not know about buttons! I am intrigued!

That is very interesting! I didn't know about that at all. I think I would get tired of everything be bordered by black for the rest of my life!

My two degrees! History and Thanatology (death, grief and bereavement).

Thanks for the history lesson. I knew part of it. Had no idea on the rest. Blessings on your new year!

I am one of those "crazy" people that collects Mourning things. I have pictures, jewelry, and other such. So the buttons would make a wonderful addition. would obviously love to win.

I didn't know about the different bands of black! Thanks for sharing, I am super curious what the buttons look like!

My favorite color is black and so is most of my wardrobe! Occasionally I branch out into gray, brown, or purple but only occasionally. Victorian mourning traditions are fascinating and I would love the chance to win some buttons. I'll have to start searching for those mourning handkerchiefs too.

I guess I never realized the whole "mourning attaire" other than to wear black.

Thank you for sharing ...I am now very intriqued and would love the opportunity to be included with the draw for the "mourning buttons". I love buttons and would love to have a chance to include these in my collection!

Thanks again for sharing...

Love reading about these things. So interesting. Did not know about mourning buttons---I'm intrigued!

I have recently discovered your lovely blog and check in regularly. Isn't it interesting, the things we learn about times past?! My dear husband passed away three years ago, and while I miss him terribly, I cannot spend the rest of my days in black. I remember him in many different ways and would find special use for the buttons. Happy New Year!

I have been reading your blog for a while now, and love your Rouenneries fabrics!

Just had to comment on this one because I just finished a book (Falling Angels by Tracy Chevalier) that mentioned the mourning stationary and handkerchiefs, and had never heard of them before. Now here I am learning about them twice in the space of a few days!

Thanks for the great lesson on Victorian mourning paraphernalia. I would love to be entered into your drawing!

Happy New Year tidings to all!

The glass mourning buttons sound
lovely. January arrives with fond
memories of three loved ones who
passed in the month of January. Three trees have been planted over the years to cherish and remember our sweet family members we hold dear to our hearts. Mourning buttons are a heartwarming tradition to carry on from generation to generation.

Thank you for sharing.

Ooh la la!! I adore buttons and have collected vintage and antique ones for both my viewing and sewing pleasure! I have some nice jet beads and buttons from Paris and some old engraved bone ones. Enjoyed your post about mourning ephemera...I have collected antique 19th century mourning dress fabrics for an eventual quilting project as well...for now they adorn my

Mourning beads....sounds like a perfect addition to a journal I am working on. Count me in on the drawing!
Thanks!

I am indeed always in need of buttons. I am, too, very curious about them! I was very interested in the info about mourning fashion, notepaper, you wrote about. Who knew? Jamie V in MT
amzanioli@yahoo.com
http://rem-nants.blogspot.com

The Victorians did mourning well, their jet jewelry, and gucha percha, and vulcanite, it gorgous, but as much as I admire the hair jewelry's worksmanship, for some reason it really makes me go, ewwww. Sign me up.

How intriguing! I love any kind of old buttons and what an interesting addition to my collection. I'm in!

Seems like I always learn something from you. How very interesting. This is really new info for me. Gay

I've collected a few pieces of mourning jewelery but have never seen the hankies before! Something new for me to look at for when visiting the antique flea markets. The buttons sound intriguing!

I love the beauty that they added to almost anything that was functional. Please add me to the drawing!

I've collected buttons and handkerchiefs for years and have come across some lovely pieces made from braided/woven hair and black handkerchiefs that I assumed were taken to funerals, but had never heard the symbolism of borders on handkerchiefs and stationery....something new to search for! Count me in on your drawing! Cyndi

i have jars of buttons just like my mema would give me to play with while she sewed. i can never have enough buttons! love the post!

Sounds too interesting to pass up.

I'm not in need, and I very much hope not to be anytime soon! But I am curious and I love buttons.

I do love jet. Hope I'll be the lucky one. Carol

I love old buttons, totally curious about mourning buttons.
Can you post a picture regardless of the winner. Thanks!
Nancy N.

Wow, I had never heard of those. How fascinating. Would love to be in your drawing. Thanks so much for the opportunity and Happy Happy New Year!!

I also collect mourning antiques. I often use them in my collage art. I would love these.I will keep my fingers crossed !

would love some mourning buttons! sounds so sophisticated in my world!

I had no idea about the relationship between border size and mournfulness. Very interesting.

I would love to throw my ring into the hat for the mourning buttons. They would make a perfect complient to my mourning brooches from the UK.

You are always so generous!

You find the most incredible things! Would love to win something so interesting!!

Oh yeah...sign me up too. I do Civil war reenacting as a widow.
Rose

Mourning fabrics- reproductions- are very beautiful, so I guess mourning buttons would be lovely too. Count me in the drawing please!

With years of example from the top, those clever Victorians knew a thing or two about mourning in style, didn't they?

Ditto with most of the comments above. Never even heard of such thing before. I'm curious!

Would love a chance to win a set of mourning buttons. Always find intriguing the cultural standards and fashions of the Victorians (and Edwardians). Count me in. Thanks.

I love buttons. As time passed, I guess it's okay to use them for another occasion, don't you think?

I have never heard of the Mourning items, thank you for sharing, I would love to be entered.

Ironically, I was researching this and came upon your site - hope to get selected!!!

The Joy of Nesting said...

I always find it rather fascinating that once the late Victorians discovered all things ancient Egyptian they were so amazed and bewildered at how death was such a large part of that culture. By the time WW1 started there was many books dedicated to correct death edicate!! Hmmmm