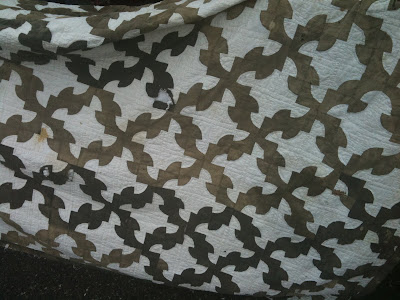 Molly and I hit the Alameda Flea Market this past weekend - in the rain - and I discovered this old quilt being used as a packing blanket in a vendor's booth. I was a bit worried about the condition and if it would hold up, but when the dealer offered it to me for $10 I thought - I'll take my chances. The Drunkard's Path quilt pattern is said to have played a significant role in the Underground Railroad. The quilts were hung on a clothesline or over a porch railing to convey hidden messages. Legend has it that the Drunkard's Path told slaves to "zigzag a path" to make tracking more difficult. There's also evidence that the pattern actually originated in the late 1920s. I am working on improving my knowledge of early American quilts so I can incorporate our Moda fabric line into these designs - early 19th century French florals and stripes meets early Americana.
Posted by Kaari Marie

What a great idea! It's so interesting to me how quilting and needlework were so intertwined with the social, political and economic situations of their era. I also love when you can take two things that aren't related and intertwine to create something new. I have been spending time taking traditional quilt patterns and adding needlework (think crazy-quilting without the crazy patchwork and that's sort of what I'm doing) and I am loving coming up with something all my own. I look forward to seeing your "combined" effort

Wow, lucky you on the purchase for $10.00! I hope you ran as fast as you could after you paid the vendor, so they didn't have a chance to change their mind!

dude, it looks even better all dried out. it's beautiful

Kaari, great rescue! I remember my cousin, dealer Sam Beazley of Portmerion Antiques, Pont Street, London telling me kthat some of his best finds in quilts were from farmyards where they used the old ones to provide a grip for wheels in the winter snow - he also bought them for peanuts and said he could also buy French Edwardian dinner sets so cheaply in the US - they were out of fashion and English people were very keen to replace sets that khad gone during the war and were thinking of entertaining with some good china on the table - Elizabeth