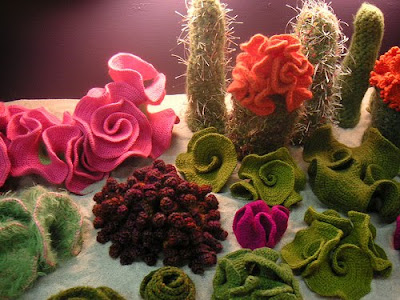 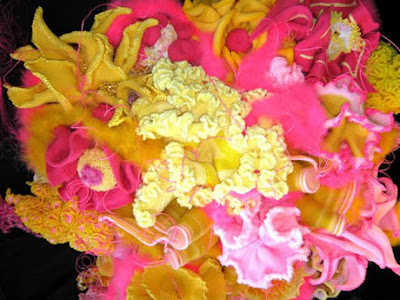 The Autry National Center, here in Los Angeles, has awarded Margaret and Christine Wertheim, co-creators of the Hyperbolic Crochet Coral Reef project, the first Theo Westenberger Grant for Women of Excellence, an honor that recognizes “innovation in any field of art” by a living female artist. On Saturday, April 30th the sisters will present a lecture about their five year project building a community project to help save our coral reefs.

Who would have thought that crocheting would lead to solving a 200-year-old geometry problem and then become a crocheting phenomenon. Designed and curated by The Institute For Figuring, Margaret and Christine have taught women throughout the world how to crochet a coral reef. By engaging local communities to crochet coral reefs, they have celebrated their beautiful diversity and addressed the urgent need to protect these vanishing ecosystems.

From the sisters' blog:
"THE HYPERBOLIC CROCHET CORAL REEF WAS LAUNCHED AS A RESPONSE TO THE DEVASTATION OF LIVING REEFS FROM GLOBAL WARMING AND OCEAN ACIDIFICATION, THE CROCHET REEF RESIDES AT THE INTERSECTION OF ART, SCIENCE, MATHEMATICS AND ENVIRONMENTALISM. ENGAGING PEOPLE AROUND THE WORLD, THE CROCHET REEF IS AN UNPRECEDENTED INVOCATION OF A NATURAL WONDER THAT HAS BECOME IN ITSELF A NEW KIND OF WOOLY WONDER."

Check out Margaret Wertheim speaking about the beautiful math of coral on Ted Talks - one of my favorite places on the web for information and inspiring ideas.

More information for the Autry discussion on April 30th can be found here - hope to see you there!
Posted by Kaari Marie

Some of those "woolly wonders" would make lovely coral inspired brooches - the texture is beautiful.
Laraine

I'll be there! Thank you for posting this information, I would have never known about it. Will your shop be open on the 30th? I see you have a workshop in the morning, but I would like to pass by on my way to the museum.

ohman, i want in on this. it's spectacular.

check out this book on which TED talk was based
http://www.amazon.com/Crocheting-Adventures-Hyperbolic-Planes-Taimina/dp/1568814526

This is lovely...so interesting.
Deb

I am always searching online for articles that can help me. There is obviously a lot to know about this. I think you made some good points in Features also. Keep working, great job! xenia coral