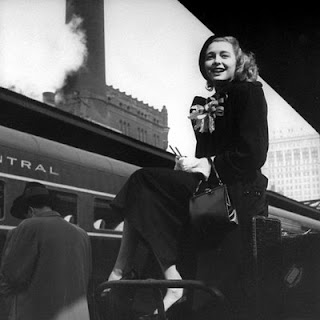 When I moved to New York in the winter of 1989 I knew absolutely no one - but I had the phone number of a girl that was willing to let me sleep in the extra bedroom of her apartment on 79th and Amsterdam. After walking up five flights of stairs and meeting Melora - we both knew - almost instantly - that we would be great roommates.
I worked for the Metropolitan Museum of Art and Melora worked for Patricia Neal. Every night we would come home and share our stories - mine usually involved tales of getting lost in the museum - trying to find the film department and Melora's usually involved some funny incident Patricia had gotten them into. Eventually Patricia was taking us both out to meals we couldn't afford - but she thought it was important that we got out and dined at restaurants with white tablecloths.
I remember Patricia had a guest book on her entrance hall table and I would always flip through it to see who had stopped by since I had last visited. She kept her academy award in the library and I would run in and hold it for a minute or two - always surprised how heavy it really was. One night she pulled out her jewelry box and told us to each pick out a jewel - I was so overwhelmed with the choices that she finally just picked up a jade flower ring and said - here this is for you - and Melora was given something opal. We spent weekends at her home in Martha's Vineyard - which was the home where Herman Melville wrote Moby Dick. One weekend JZ and I went up alone and lasted only one night - the banging windows and doors had us convinced the house was haunted.
Patricia was an old friend - someone that I hadn't seen in years, but someone who made a mark on me when I was very young. She was honest, direct and didn't put up with incompetence, but she was also gracious, funny and loved life. I will miss her glamour and earthiness - and the way she balanced them both.
Posted by Kaari Marie

What a lovely story and fond memories you will always have of her.
R.I.P Patricia Neal

My Little Part of Heaven said...

Do you still have the ring? Thank you for sharing your memory.

What a wonderful story to share. That time of your life must have been a great experience.

What great memories. Its lovely that she was so generous. Thank you for sharing this.

What a lovely story. It sounds like she was a mentor. I didn't have any mentors but I still try to be one to young women when given the opportunity. My 20 year old son supplies a string of young women who I try subtly and sometimes not so subtly to influence in a positive way. Thank you for the sweet story.
Au Revoir,
♥Danette

oh my what memories you have! such a delightful telling as well...well done...very much enjoyed.

Great story - I always loved Patricia Neal - she was a great actress.

What wonderful moments you've shared with us, thanks for that Karri. Another amazing woman has passed before us, and fortunately for you, the joy to experience her being. OX Hol

HOW INCREDIBLE and WONDERFUL to know Patricia...

And although she touched your life in a deep and meaningful way... I know you touched her life too!