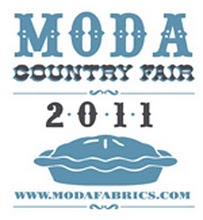 Today's the first day of Moda's Country Fair Blog Hop featuring all of their fabulous fabric designers. I've never done a blog hop before, but I'm up for anything new these days! For 27 days you can hop around and see all sorts of fun projects inspired by the country fair, learn interesting, little known facts about your favorite designers, pick up new project ideas and maybe even win a prize or two! It's gonna be a fun-filled month with lots of inspiration from the fair!

We'll be back on September 29th with our Panier de Fleur project and some fun giveaways...hope to see you then!

Meanwhile, here's the line-up and the blogs to follow:

Too cute! Thanks for keeping at it and posting the instructions! :-)

The Moda Blog Hop has been fun and a great way to see what all you creative artists are doing! Thank you for all the inspiration! Would love to win your goodie bag.