A No is Never a No Until it's a No....or The Way I Came to Design for Fabricut 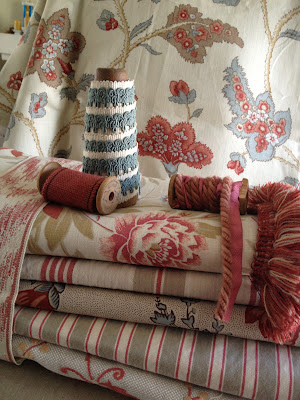 This is a very long story...read on only if you want to know how I came to design a line of interior fabric.....
A couple of years ago in France, a friend of mine asked me what I wanted to do when I grew up.  I kinda looked at her blankly - thinking "Aren't I already doing what I want to do?" And then she said - "What else, what else do you want to do?"  I thought about it for a minute and then decided that what I really wanted to do was furnish a hotel with all sorts of wonderful French-inspired fabrics.  She looked a little startled and said "Well you can't design the interior of a hotel without having a line of interior fabrics."  Oh - is that it, I thought, well then, I guess I need to design a line of interior fabrics.  She continued to tell me about a friend of hers that had done some research into fabric companies and had settled on what she thought was the best in the business.  That sounded good enough for me.  When I returned from France, I packed up a box that represented the French General look - I included our books, swatches from our Moda collections, a collage of my favorite things and a press book - with clippings of French General from the past 15 years.  I looked up the address of the interior fabric company, I sent off the box and then I waited.  And waited.  And waited.  After about a month, I was getting a little tired of waiting and decided the fabric company must not be interested - other wise they would have contacted me - in a timely manner.
I was just about to give up all hope when I went off to a creative gathering and heard Jo Packham give a talk about her history of her work and the stumbling blocks she encountered along the way to her success.  She told a story about pitching a story to someone, and waiting for months and months for an answer - positive or negative - just waiting for an answer.  Eventually she got on the phone and somehow got the answer she wanted. The moral of her story was: a no is never a no until it's a no.  What?  I had no idea what that meant.
After I returned home from the creative event, I was still waiting to hear from the fabric company, but then it hit me - I actually hadn't been told no yet...I just hadn't heard anything yet, so maybe the answer was yes.  I emailed the president of the company and asked if he was interested in carrying a French General line of interior fabric.   To my surprise, he called the shop that afternoon and left a message saying "Sorry for the delay, I've been swamped with other projects.  Yes, we are very interested.  Call me."
And so I called him back, a couple of days later, and eventually, we began work on a project that has taken up the better part of the last two years.  I have worked with a couple of wonderful designers from the company, who helped take the French General look and lifestyle and interpret it into a line of home (and hotel??) decorating fabrics.  We are getting ready now to introduce it to showrooms and reps and come January 2013 it will be available throughout the United States at fabric and home decorating stores.
Here's a little look-see into our collection of home fabrics for Fabricut - a collection printed on linen and cotton and filled with beautiful 18th century French florals, stripes, wovens and embroideries.  We have stayed true to our palette, offering three groups of colors: rouge, bleu and bisque.  We've also designed a coordinating collection of trim - pom poms, tassels, fringe and gimps - all out of dusty, soft natural materials and colors.  I hope you enjoy the coming collection as much as we have enjoyed designing it! 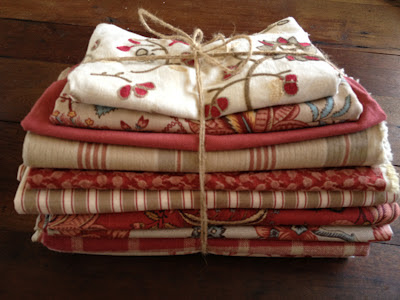 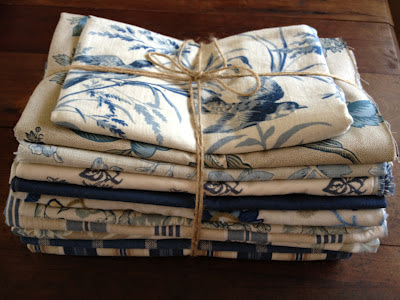 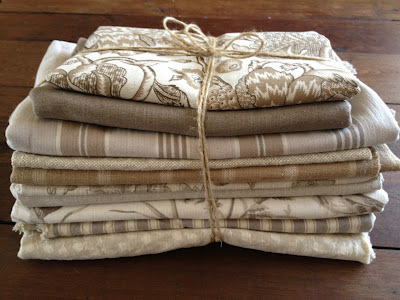 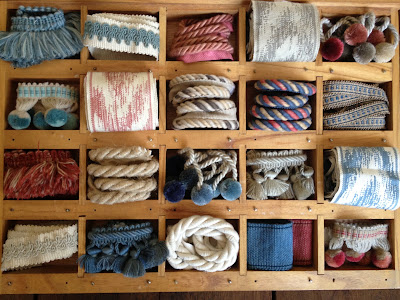 And that's how it all began - two years ago when I decided I wanted to decorate a hotel when I grew up -  now I just have to find a hotel in need of being decorated!

Oh my goodness! I must save a lot of pennies so I can get a bunch of this for my home.

Congratulations! This is an amazing story. It was a fun read with beautiful graphics! I've always had a smaller dream. I want to design the interior of RV's. Do I own one, no. I just have been in alot of them and don't understand why they all look so terrible.
I'm really happy for you. My favorite color of the three is the one I am looking at. I can't decide. They are all amazing.

Oh my goodness, what a great story that is! I love the trims that go with the collection just as much as the actual fabric! Yes, you definitely need to find a hotel in need of decoration and when you do you *must* tell us so we can go stay there!

I love your story, and new line of fabrics. Only problem is now I want to buy a French hotel for you to decorate!

How amazing that you should be sending this info at this time. I have been wanting/needing to recover living room furniture and how perfect!!! is this. I only wish all this would have been available so many years ago to be enjoying all this time.

Kaari -- I have been holding off and holding off from creating new valances for our dining room -- No need to wait any longer -- Just love the line that you shared.

When again do we find it in stores ? and which ones ?

Congratulations -- on having another one of your dreams come true!

They are all so beautiful! Every time I see something new that you have created, it is more lovely than the last. You have really outdone yourself this time. Congratulations on giving birth to a new line. I wish you great success and joy as it grows and grows!

Inspiring and gives hope to those of us who struggle with bringing our dreams to fruition every day. Two of my most favorite things combined....the FG look and home dec fabric. Now can we please dump the scratchy burlap, painter's drop cloths and musty feed sacks?

WOW! I am so inspired by your designs and now this? Please let us know when and where fabrics will be available! Can't wait to see more!
Anna
Southampton, NY

Beautiful, I wish I had the Bleu now but I can wait.51

How exciting! And they look gorgeous!

i may have to redo my home in the new French General style!

tres bien! let us know when they hit the stores. I recently purchased 2 overstuffed chairs and when I got home I realized they matched my French General fabrics, which is probably what caught my eye in the first place.

Amazing, just amazing! You are one talented lady!
Lee

Congratulations, Kaari! I love all of the new fabrics.

Congratulations - how exciting for you! I have always loved your fabrics and can't wait to see these when they are available.

Oh Wow! It is beautiful. I will have to remember, A No is Never a No Until It's a No. Congratulations and I cannot wait to see it in stores.

How beautiful the fabrics are but an please explains what are gimps ? I ave never heard that term before.

Thanks for sharing your article. I am an Interior Designer and purchase primarily from Fabricut. Will look forward to seeing your line when it comes out! Have been dabbling with the idea of fabric design, would love to hear the very beginnings of your adventure in textile design!

Congratulations on all your hard work so that your vision has come true.
Sure hope these fabrics make it onto the market here in Australia.

Fabulous! I really love those trims and the Rouge! congratulations!!

I too would love to hear more tales about your process of designing textiles. Not many designers are lucky enough to have both a quilting line and a home fabric line of fabrics. You are very talented and it shows with each collection you design. I can't wait to use this palette in my house in Aspen.
J.R.H.
San Francisco

Wow! How exciting! How fabulous! Kudos!

Great story! Beautiful fabrics and trims. I love your creations. They are all so beautiful.

So beautiful! Thank you too for the life lesson :)
Kas

Lovely colors and designs! French General has done it again!

Absolutely gorgeous! If you can't find a hotel, perhaps you'd start with my home??

This is such a wonderful story. So inspirational.
I cannot wait to see them! Now I know I can find the perfect fabric for my kitchen windows!

Thanks for sharing your inspirational story. The fabric collections are beautiful and I can't wait until they are available. They would work so well in the guest rooms
I'm getting ready to decorate!

Great, great advice Kaari!
And I am so glad you persisted because this fabric is gorgeous....
It makes me want to open a hotel of my own, or perhaps a bed & breakfast... or maybe it's just time to redecorate this house!

So, what are you going to reuphoster first? LOVE this fabric.

I love the Bisque! If I had a hotel I would want that colour scheme everywhere. Congratulations!

Love the the blues! I have a porch swing badly in need of being repainted and the fabric part recovered and this fabric would be great. (the biggest problem blues or the reds)

Totally scrumptious. And the 'no' lesson is vitally important. Thanks for sharing both.

What an interesting story1 It backs up my theory "If you want something to happen, you have to make it happen"!

Congratulations - it looks wonderful! I'm so thrilled for you! The trims look yummy!
Celeste

Oh Mon Amie..........they are divine! As you are, and your sweet family. I Think of you all often and the wonderful group of ladies in France this summer. I see why you are in love with France. Thank you for coaxing me out to France, and for bringing your beautiful Fabric designs to us. XO!

Those fabrics are just beautiful - both the designs and the colors. Who wouldn't those in their home?
Linda Kay
lksmith@gmail.com

Kaari!
Molly was right when she said you always "get it done"...and with beautiful style, I might add. Congratulations and I can hardly wait until you open the hotel:)
Fondly,
Sue Stokke

Lovely, lovely and more lovely! I will be one of the first to decorate my home with your new collection!

I'm more than excited! I will put all my project's on hold until this collection is released.
Your trim pom's in bi and tricolor have stolen my heart! Fantastic, well done! X, Hol

And I have just the antique chaise lounge that really needs some of that luscious blue fabric.....so happy!

Would be lovely to get this in the UK.