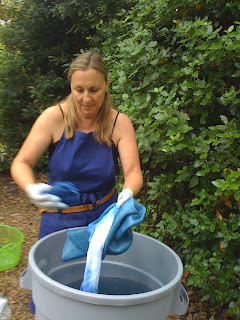 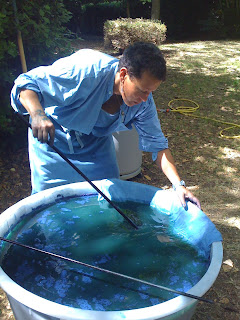 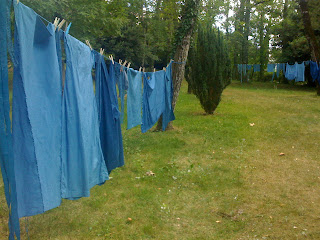 My favorite day so far! We spent our day learning about woad - an ancient blue pigment. Medieval Toulouse was built on woad, regarded then as a magical substance because it begins as green leaves and initially imparts a yellow dye which turns blue only when oxidised by the air. Denise Lambert, the Woad Master, mixed up the woad bath dye in the garden early in the morning. By 11:00 we were all dipping our linen nightshirts, bundles of lace and hanks of yarn. I threw in a hand full of sheep's wool for needle felting as well. As one woman in the group said, it was as if we were transported back to ancient times - quietly spending the day doing woman's work. Everyone worked together either dipping the fabric, pushing it down into the vat, wringing it out, hanging it on the lines to dry and then repeating the process for a second dip. Everyone was mesmerized by the simple process and the beautiful results. “It is a complex and difficult pigment, but it produces one of the most beautiful blues in the world,” Denise said.
We broke for a lovely lunch on the patio and then went back to work. No one could get enough of their pieces colored! By the end of the day - everyone had their arms full of the color of France - it was a beautiful day filled with imagination, creativity, and camaraderie - who could ask for anything more?

Okay who says surfing through craft blogs isn't educational! I mean how would I have picked up on Woad if not for a crafty blog?!
TFS I found it fascinating! :D

Hi, This is a good post, indeed a great job. You must have done good research for the work, i appreciate your efforts.. Looking for more updates from your side. Thanksikat fabric by the yard