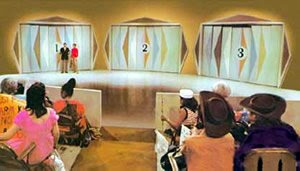 I saw that Berger Beads left their information on a post I wrote last week and it got me thinking about dealers. Bead dealers, textile dealers - dealers in general - they are a funny sort. Some of my dealers are my closest friends - and I wouldn't have it any other way....they are funny, direct and at the end of the conversation, they are interested in just one thing - making the deal. When I visit flea markets, I like to find one or two dealers and just buy deep - once I find a dealer I like, I tend to stick with them.
I speak with one of my dealers almost every day - and it's usually the same conversation...but he always hopes that at the end of the conversation I will say, "Ok - send me a few pounds of that opaque lemon druk bead" - but most of the time, we just check in with each other - see how the other one is doing, throw in a bit of bead gossip here and there and then it ends with "Call me if you change your mind" or I say "Call me if you find any glass flowers, birds or leaves!"
Another dealer, here in Los Angeles, stops in French General every once in a while, last week she stopped in to invite me to her 81st birthday party this weekend. Her house is really her trunk - it is filled with textiles from around the world that she collected when she and her husband traveled the world during the seventies while he was a bigwig at Paramount Studios. Half the time she won't sell me what I want, because she is emotionally attached to it (something I also suffer from) but usually, she ponders on it a bit, tells me where she found it, what she had always wanted to do with it and then - let's go. I pay her whatever she asks, because she takes me on the journey with her - it's worth the trip.
Sometimes deals can go bad - but I usually give in before they do - because if I am fighting that hard I know I really want it. Take for example, the morning at Berger Beads last week. I have been visiting this old bead shop for 20 years, and, it still amazes me the old, old pieces they have in quantity. On this day, I knew exactly what I wanted. I went to the back, picked up the small boxes of old glass pearls and walked up to the counter. Along the way, I spotted some old, old, old cranberry dimpled glass on wire - the cranberry glass that was made with the flash of gold, it sparkled.
The dealers spotted me, they knew I had found something beautiful. Let the games begin. I thought it was overpriced, so they came down a bit. I offered. They countered. And on and on it went. For almost an hour!! Finally, the owner walked in - I had been dealing with the counter-dealer - there was a bit of hushed talking between dealers. Finally, I said to the owner, this is what I am offering, do you want it or not? - he quickly said, Done! I loved it. My brother said he heard the counter dealer cry out, "OOOOOOHHHHH" - as if she had lost. The owner knew it was a good deal for both of us and we were both satisfied. But oh what a struggle!!
I guess that's what some business is all about - a good deal at the end of the day.
Posted by Kaari Marie

whoa!
this is my favorite story
on your blog
so far!

i love
the behind~the~scenes~ness of it.

thanks for sharing this side of things.

maybe there is
a different TYPE of book
still inside you--->
a people/business book.

Wanted to let you know how much I enjoy your weblog and French General website, on an ongoing basis. I am fairly new to reading blogs and have not as yet ever responded to one. (Don't know if I'm even doing this correctly, but I'm learning as I go along. . .) However, I did want to let you know that your weblog is my favorite one, and it's the first place that I check each day to see if there is something new.
Your photographs and stories/insights are always interesting to see and read, and inspirational as well. They make me want to go out and be creative in some way! Love the "inside stories" about your business and your travels, and the pictures of your favorite finds. And your weblog compliments your website, books and magazine articles so well. I feel like I've found a "kindred spirit" who loves the same sorts of vintage notions, antiques with character & patina, old linens and old places that I do.
Unfortunately, being on the east coast I'm not in the "neighborhood" so to speak, but would love to have a chance to visit your shop, in order to soak up the French General "atmosphere/lifestyle" in person.
Barring that, I have found your decorating boxes, old buttons and tins of "goodies" that I've ordered through your website to be just spectacular - a real visual feast. Unfortunately, I find myself hating to actually use many of them because their presentation is so lovely that I hate to disturb their "vignettes". Silly me - Guess that qualifies me as a French General "groupie"!.
Anyway - keep the books, millinery, notions, articles and visual/written inspiration coming. It's wonderful to find someone who "gets it" so totally, and who shares her creativity and her finds with all of us. Thank you. -Karen