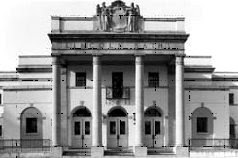 Living in New York, we used to escape the craziness and drive north a couple of hours to Saratoga Springs. Within Saratoga State Park are two bathhouses, the Roosevelt and the Lincoln.  It's a destination well worth the trip.
For more than a century, sophisticated travelers flocked to Saratoga Springs to soak in the region’s culture and charm, as well as the area’s famed, soothing mineral waters.
By the mid 1800's, bathing in the mineral waters had become a common health treatment. The historic Roosevelt Baths and Spa opened in 1935 as a bathhouse. Many believe that regular bathing in mineral springs is an important factor in preventive health care and that using the mineral springs assists in reducing stress and strengthening the body's overall functioning.
At the bathhouses, the mineral water is combined with hot tap water to bring the water temperature to ninety-seven degrees Fahrenheit. This keeps the carbonation at its peak. During a bath the gas bubbles form on the skin producing a gentle stimulation. Some carbon dioxide is absorbed through the skin, thus dilating blood vessels and improving circulation. 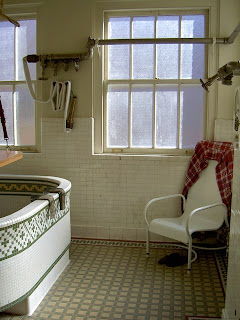 This all sounds quite debonair and fancy, but in reality these bathhouses are anything but. The bathhouses almost have a medicinal feel to them - there are plenty of white tiles, all oxidized by the water minerals and the average age of the women helping you in and out of the tubs must be early nineties. These women have worked their whole lives in the spas assisting the sick and the healthy. The first time I visited, during the summer of 1994, I was able to soak at the Roosevelt bathhouse, before it closed for renovation. After I had soaked, for almost an hour, a 90 year old woman came in and said "Oh honey, you got it, you really got it" - I guess she must have known that I really needed it.
Posted by Kaari Marie

When I was a kid, we would drive up to Lassen Park in northern California with my aunt Ruby and uncle Felix. Aunt Ruby believed that drinking sulfur water was good for her health--and at Lassen, it came right out of a regular drinking fountain, hot and smelling like rotten eggs. She never persuaded me that it was a good idea. I'll stick to regular old water out of the kitchen faucet!!

There's a place like that near the Greenbrier in VA. They're sulphur springs and it's so old-fashioned. They say Thos. Jefferson used to bathe there. That's good enough for me!