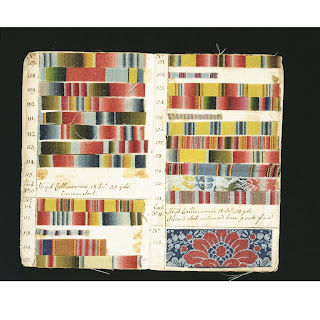 My friend and textile mentor, Elizabeth Baer, has a swatch of every ticking she has ever found. Blue and whites, blue and reds, red and whites, red and pinks - every color combination you can imagine. One day, when I was visiting her and we were having tea in her cellar (a cellar that has over a dozen rooms!) she pulled out this scraggly little book of swatches and showed it to me. I think she could tell that I coveted it - she let me look at it and then put it away quickly.
Elizabeth tells the story of how, many years ago, she was driving down some old rural road in the countryside of France when she spotted a vide grenier sale (attic sale) - she found all sorts of treasures within the old house and then asked if they had any other textiles for sale. The pointed her towards the old barn. When she walked in, she saw turn of the century bed tickings from floor to ceiling. The tickings had been stripped of their feathers and were left to be burned. The farmers had taken the feathers to sell, but the cloth was useless to them. Elizabeth bought every last ticking from that old French barn and started decorating with them - she covered sofas, club chairs and settees.
The old tickings are getting pretty rare to find in France - as are most of the old fabrics. Every once in a while, I get lucky and run into an old dealer that has a trunk full of stripes and florals....it's a part of French history that has slowly disappeared over the last few years - slipped into private homes and chateaus.
Posted by Kaari Marie

How special to see her book in person. I'm drawn to the graphic appeal of that page itself!