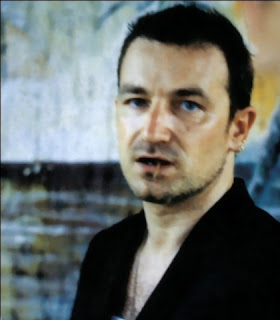 Many people don't know this, but I always thought I was going to marry Bono. That's right, the rock star, Bono. A few people in my family, including JZ, have always thought that if I ever had the opportunity, it would happen. No matter that Bono has been married to the same beautiful woman, Ali, for 20 plus years and that he has four children. Last night, as I was sitting less than 10 feet away from him, listening to him talk at the annual Women's Conference in Long Beach, I think we both realized, maybe independently, that this marriage was probably never going to happen.
My old room mate from London, Diane, was visiting and e-mailed me around noon inviting me to come down and listen to Bono - as well as Billie Jean King, Gloria Steinem and Bonnie Rait. What a rush. This yearly even is put on by Maria Schriver and her husband, the governor of California. 14,000 women gather to engage in conversations about passion and the power to change ourselves and the world around us. Here's a little bit of what my (almost) husband had to say - he was passionate, convincing and everything I thought he would be. I was so impressed with his belief that each and every one of us can work towards changing the world for the better - or like Bono said, the world is so much more malleable than he ever thought. Amen.
Posted by Kaari Marie

When I was 16, about 20 odd years ago, I went to a U2 concert and waited out the back after the show. Bono came out, and the swarm of girls crushed around me to get to him. He touched me on the head, looked me straight in the eye and said 'are you ok down there?'... that was my celestial moment with him - one I'll never forget!

you lucky son of a gun!

i am plunging through here
playing catch~up
and had to stop a moment...

your Almost{in your dreams}
has such the perfect way
of looking at things,
don't you think?

i hope he Sold It
to take time to become involved
and
to make a difference...

Ok..I'm still here lurking. This is a post after my own heart. U2 has been my favorite band since 1984 and I remember being disappointed when I found out he was married..as if I had a chance..lol! Ali is such an incredible woman I think that he is the one who is lucky to have her.
By the way I did get to meet Bono in 2004 and received two pecks on the cheeks..and a photo of us to boot I returned the favor:)
Have a wonderful weekend!