A Common Interest in the Bizarre 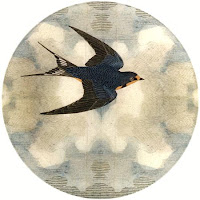 I have a friend in New York, John Derian - who I met through another friend, Alexis Bittar, but that's another story. Molly and I have enjoyed John's friendship ever since he first ventured over to Crosby Street. John is a decoupage artist, although that doesn't begin to describe him. He is actually a curator of the odd and unusual. I share a strange sense of the bizarre with John. I don't know if he actually knows this, but I think we are both attracted to the decaying form of craft.
At his curated shop (or is it shoppe?) in New York City, you will find French ledger books, old slate chalkboards, porcelain body parts, make-do's and unusual sea sponges. John has such a wonderful, odd sense of direction - anything old, organic and hand-made. How about a vintage child's costume? He's opened up a second shop, just two doors east, filled with textiles. Serene, delicate and exotic cloths are strewn about the four walls and floor with an old mirror and lantern hung here and there.

I hear John has designed a line of furniture which he unveiled at Bergdorf Goodman last month - bravo John! Here's to the strange collections - the beetles, bugs butterflies, bones and now...buffets!
Posted by Kaari Marie

are those clothes from his site? hip hip hurrah for john! i just thought of him as i read the new issue of The New Yorker, where Hugo Guinness' art is in the 'spots'. I feel like john brought hugo to light... like he does with lots of great things.

LOVE him! I made a special trip to NYC last year to visit his shops. Truly a great place to go!

I've tried decoupaging and it's much harder than it looks. His pieces are perfect.