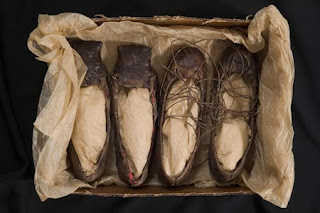 Years ago, Molly and I were walking through Soho - looking for something to inspire us, looking for anything that would take our mind off of whatever it was we were supposed to be doing. We stumbled upon a shop called J. Morgan Puett - walked inside, saw the dirt floor and immediately knew we had found what we were looking for.
J. Morgan Puett was essentially a clothing store, but actually the woman, J. Morgan Puett was a historian of hand-made garments. "Her quirky SoHo retail space was heralded for its evocative environment–a bewildering combination of store, art installation, architectural remnant, and factory. Models rode a salvaged merry-go-round for fashion shows, the whirr of sewing machines provided a soundtrack, celebrities mingled with artists, and clothing shared shelf space with antique farm equipment."
When she realized that the atmosphere and culture of Soho was about to change, she decided to preserve the entire contents of her shop in beeswax. Yes, beeswax. (Her father was a beekeeper in rural Georgia). She literally dipped everything - from clothing to receipts to rubber stamps. 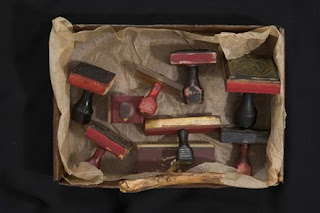 Since her days in New York, she has become a bit of a pioneer, living on 96 acres in the hills of Northern Pennsylvania.
A wonderful article, in the New York Times said " She is also a kind of radical homesteader, having staked a claim here on land stalked by black bears, deer, coyotes and porcupine. Along with her 8-year-old son, Grey Rabbit, and a changing cast of friends and romantic partners, she has built a home that is an ongoing experiment in art, design and aestheticized living, an artist colony conceived in the communal spirit of 20th-century institutions like Roycroft and Black Mountain College, with her own house, just now being finished, at its heart." 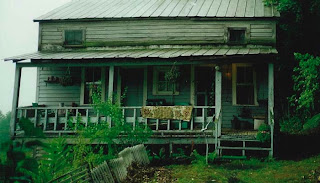 And again, "The idea was to create a place for themselves and other artists to escape New York, and to “move our art practice into a more interactive arena, where things could happen in collaboration,” Ms. Puett said. “If you’re not doing it with and for your friends,” she added of that practice, “then who are you doing it for?” Amen. For more inspiration, read about J. Morgan Puett's home, Mildred Lane.

Oh, man, that is just awesome. SO good to see her vision again...

That is so awesome. Someday can we do the same?