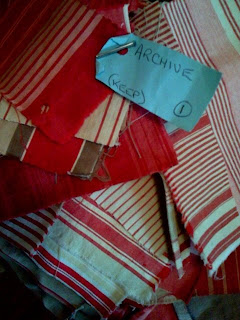 This probably wouldn't suffice for most people, but what's fascinating to me is the quantity of different stripes that were woven during the 19th century. The shading, color and pattern are all still vibrant and clear. Elizabeth wrote in her enclosed letter..."These tickings come from a very large feather and down reclamation factory in Tours, France (since closed after the death of the proprietor) and they were largely imported from outside of France for the feathers the beds contained and the covers were sold in bulk, by weight, to rag merchants for cleaning machinery." 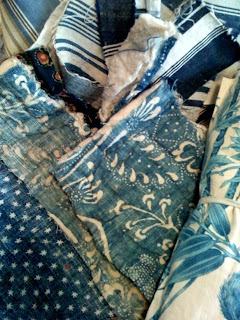 Elizabeth also sent me a bundle of early indigo remnants. Hand-blocked in France during the 18th century, these fabrics are hanging on by a thread - but you can still see the beauty of the pattern in each one. Most of these tiny pieces are from an old bouti quilt. 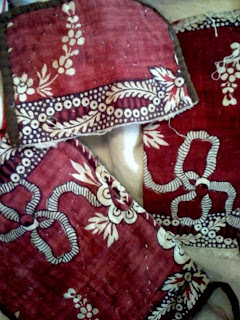 My favorite scraps were hidden at the very bottom of the box....an old piece of a madder blocked print. In 1854 a French textile historian wrote, "One of the most beautiful results obtained from madder was the red ground merino on which botch were printed in black. It was marketed in 1810 by Nicolas Koechlin et Freeres." (Merino refers to a type of cotton fabric often used for Turkey red printing. Botch=hodgepodge?)
Did you say you wanted to learn about textiles?
Posted by Kaari Marie

Yes, yes and yes. I love learning about antique and vintage textiles. How they tie into history and anything else that is textile*gossip...I find that there are so many variations of stripes amazing, exciting. Please keep us posted.

Very interesting! I love fabric!
If you ever need anything in Dallas feel free to contact me! :))

these are great, what is to be done with them?

I bought your book and I will tell you thought it was ok- I decided I really did not want to sew many of the projects- I just wanted your stacks of fabric to admire and enjoy. Perhaps eventually, I would sew some of it.

Anyway- I am coveting your box of cuttings.