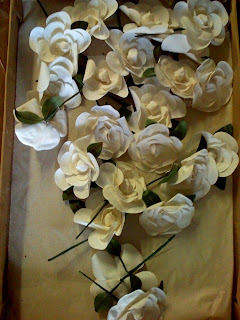 A couple of weeks ago, Dawn and I decided to go digging downtown for some old millinery. After we finished digging at our regular spot, California Millinery, I told Diego (our favorite "boy behind the millinery counter") where we were headed to next....an old French flower importer on Broadway. He looked at me with wide eyes and asked "Who told you about that place?" I mentioned a woman who had come in to French General and given me scattered details of her favorite vendors downtown. Diego said, "Nobody knows about that place - don't tell anyone you know about it. And by the way, they moved - they left a long time ago." He eventually wrote down an address. I thanked him - and immediately walked over to the original address on Broadway. Sure enough - the place had been empty for years - not a petal on the floor.
A few days later, we were ready for the adventure - we packed up water bottles, a bag of snacks and rubber gloves - we had no idea where we were headed, but we had a map and the name of an old flower importer that had moved to South Central LA - sounded good to us!
Even though I am from Los Angeles, I don't think I had ever been to South Central - straight off the 5 South, it's a neighborhood that used to have a pretty rough reputation - but that was 25 years ago - everything changes. After getting lost a couple of times - and using our Spanglish one too many times - we found a very old storefront with no name and metal bars across the windows. 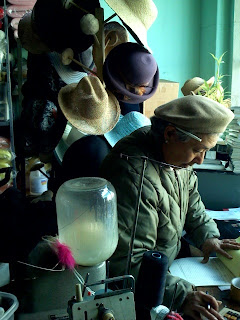 At 10:00, we had arrived ten minutes before the owner did. When Liliana finally walked in, we knew we were in the right place. Liliana had worked for the original flower importer on Broadway for over twenty years. When the owner died, she and her friend bought the business. Liliana explained how her friend had run off with all of the money and all Liliana was left with were the flowers....warehouses full of them. My curiosity was piqued.
We began to dig through boxes and boxes of flowers - navy blue roses, kelly green camellias...nothing was quite old enough. Liliana kept looking at us and saying "But that's old - that's from the sixties" - we would just shake our heads and say, not old enough. And then, finally, Dawn opened a box that was filled with old creamy white velvet carnelians ...we had struck gold. We continued to open every box in that old shop, knowing that there must be more. Eventually we had amassed a good supply of old millinery - velvet peonies, hand-painted rose leaves, organza sweet peas, black strawberries - we were satisfied.
At the end of our dig, we shared a few tangerines, laughed about my obsessive behavior and eventually said goodbye. Our car was full and we felt satisfied knowing we had dug deep and found what we were looking for. Sometimes a dig doesn't turn out so good, sometimes you come home feeling like you were on a wild flower chase.....but this time, we not only found old French flowers, we learned about the business from someone who had been in it all of her life. Good times.
Posted by Kaari Marie

kaari,
aahhh yes, the thrill of the hunt....nothing quite like it!!! i feel your rush!!

I would love to go on a dig with you..what fun is right! Sounds like you hit the jackpot though.
Louise

I want to visit you for the first time and want to know if these flowers are for sale in your store.

What a great story and what a treasure hunt. So many goodies yet there is always room for more.

That is really awesome! I'd be in heaven! any ribbonworked flowers? I still love the velvety ever slightly dyed sweet peas and leaves. YUM sounds great!
I hope to visit you this year knowing you are just a tad bit away from me!
Warmly,
Stacy~Creativemuse
http://www.etsy.com/shop.php?user_id=5023227
http://www.flickr.com/photos/52895107@N00/

I too am from Los Angeles, tho now live on the East Coast. I can visualize the whole adventure, from downtown (as a kid our dentist was in Persing Square) to the I-5. What fun to think of home and vintage milinery fleurs! Thanks so much!

This was a wonderful story. Organza sweet peas~be still my heart~! Please share pix if you can.

Sounds like you had a blast! Sometimes the journey is as sweet as the rewards. Life is too short to not enjoy it! Happy New Year

Loved this story and what a wonderful excursion! Thanks for sharing.

What a story! This is fabulous. I wonder if Minneapolis has any of these kind of places?! Treasures to be found everywhere, isn't there. Love it!!
Kari
www.artsymama.blogspot.com