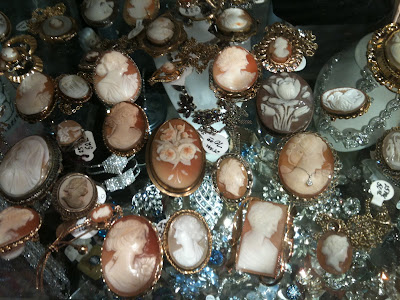 A while back, my friend Pam was wearing a ring that I really liked - it was a polished cameo that had been worn for so long and rubbed so hard that the details were almost nonexistent. She told me how she had worn it for years and then one day she lost it. She really missed it. Then, as if it was meant to be, she found it - I can't remember how - maybe she saw a friend wearing it or maybe someone else found it and gave it back - somehow, the ring was returned to her. That's when I came into the story - I coveted Pam's cameo.
I decided to start looking for my own rubbed out angelskin cameo. I looked high and low and never really saw one that spoke to me. I saw Victorian cameos, Edwardian cameos - cameos carved in green lava, sardonyx, red coral and even tortoise shell - but I couldn't find my cameo.
Last week, my friend Penny came to the shop all a flutter with pictures of an angelskin cameo she had bought in England on her last trip - the trip where she went to see the quilt show at the V & A. I thought about my missing cameo - the one that I still hadn't found yet and decided I had better start looking again.
Friday, (trust me this story is going somewhere!) I went up to Summerland to visit my friend Cathy and before we even had a chance to sit and catch up about France, woad and family, she handed me a small box - and inside was an old cameo ring. Cathy had found a perfectly rubbed portrait set into pink gold - exactly what I was looking for. I'm not really a romantic and I don't believe too much in fate - but I think this was meant to be - I was meant to wear this old cameo and put some new life into it. So I'll rub it once in a while and make sure I leave my mark - and then pass it on to Sofia or someone who shares my cameo love. Merci Cathy!
Posted by Kaari Marie

So is this the ring your devotees will bow and kiss?

I hope you will be wearing it at TCC...

Cameos are truly beautiful...I am so fortunate to have a few passed down through the family.
Glad you now have your special ring..:)

As always,it was an absolute pleasure reading your Daily Vignette. How fortunate you are to receive such a lovely gift. When I was a little girl I remember admiring my Grandmother's black onyx cameo ring set in yellow gold.
She always wore this ring and one day I asked her where she had gotten it. My Grandfather, a diamond setter and jeweler, made it especially for Ganny and she received it on her birthday many years ago.

Years later, my Grandmother gave the ring to me. I was thrilled to have such a sentimental and lovley heirloom. For many years I wore this ring and seldom took it off my finger. While I was designing flowers for my brother's wedding, I removed the ring because my finger had become swollen. Unfortunately, as a result, I lost my ring and am still searching for it. I will never give up hope that one day my lovely little ring will return home to me.

Thank you for sharing such a sweet story.

After reading your post I think I will go look for my old cameos. I bet your ring is beautiful as well as the friend who found it for you!

You write about some of my favorite things. I wish you would put all of these wonderful stories into a book, so I could share them with my daughters someday.

I had a cameo ring once. I took it off to wash my hands in the restroom where I worked. Why I walked out without my ring I have never figured out. When I went back to get my ring it was gone. I think of it often. I'm glad you found your cameo!

wasn't that a gorgeous ring?! i saw it the week before you got it and i loved it too!!

My grandmother used to always wear a coral colored cameo ring that was very worn. I used to love to look at it. I never asked her how she got the ring. I wish now I had. Her mother came from Italy & her father from France. I like to think that it was a hand me down & has a wonderful old story to it. When my grandmother passed away the ring disappeared.

OMG are they georgous or what?
I only have one cameo, now I want one just like all of them in your picture.

It was so sad to read Elissa story about her Grandmother's ring getting lost while doing flowers.
Any story about anybodies Grandmother is very special.

Elissa I will say a prayer you find her ring

I loved your story and photo of the cameos. I too recently added a cameo, a necklace, to my always growing jewelry collection. I found it at my local Assistance League thrift store in Huntingon Beach. It must have been waiting for me to buy it, as it was a bit dirty and dull looking. After I cleaned it, I realized I had found a treasure! I'm now dreaming of cameo earrings!