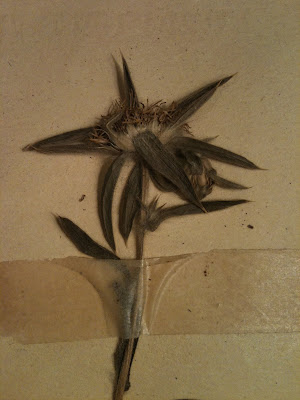 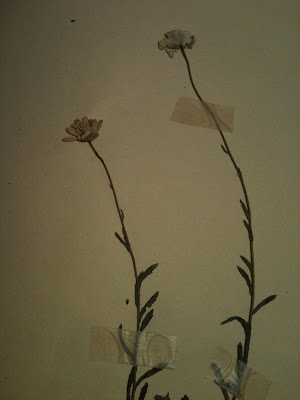 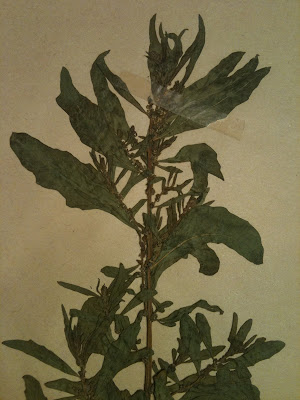 Aren't they grand? I have picked up old pressed plants for years - the old ones - the one's that look as if they have been packed away forever - the flatter the better. The first book I bought - ten or twelve years ago - is filled with hundreds of pressed leontopodium alpinum - otherwise known as edelweiss. When I inquired how much the book was, the dealer asked "Do you know what this book is about?" - I nodded and looked at her like, yes - it's about pressed flowers. She was hesitant to sell it to someone who had no idea of what she was buying. Since then, I have learned that edelweiss blossoms were given as a token of brave nobility or courage to soldiers in the war. Someone must have been collecting them and pressed them for safekeeping. Edelweiss is also a highly protected species in many countries in Europe - so the gatherer must have been fairly brave to have collected so many.
This summer in Montpezat, at an evening vide grenier, I found another collection of old pressed plants - hidden underneath a pile of books - there were 50 or so handmade manila folders - each holding a couple pages of plants. Although mostly weeds and wildflowers - each is marked with their proper Latin name and a short note about where and when the plant was found. The book dates from 1902 and is still in almost perfect shape - save for a few bugs here and there - bugs that have been living for over a century...but that's a whole other story.
Posted by Kaari Marie

This is a really cool thing you have. HUGS MARY

Hi Kaari,
I have several of these old herbariums and just love them! It was a popular pastime of young ladies to collect and press these sweet flowers and weeds.
I haven't looked at mine in a while and appreciate you jogging my memory...I will have to get them down. I have always wanted to frame a few but have been reluctant to take any of the books apart.
Thanks for sharing...great post!
:)

I love to press flowers. I have quite a collection and I think my favorites are the bleeding hearts.

I am sorry I forgot to leave my name on that last post regarding the bleeding hearts...Louise

I love pressing flowers and I am sure this book you got it's a total treasure.