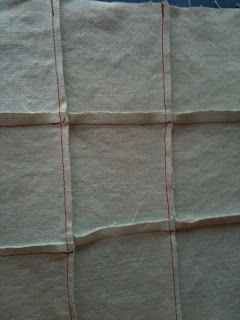 It's happened - finally. I have been thinking about it for months and months now - wondering when I was going to begin. This summer I bought a slightly used Pfaff machine from my friend Jenny Ryan of Felt Club - she was selling machines that had been used at the State Fair - how could I resist?
After a couple of years of having yards and yards of beautiful fabric sent to me by Moda, I became overwhelmed - can I mix collections - do the reds all work together ? So I decided to just begin with the scraps - the old hemp, nettle and linen that I have been collecting for the past decade - the remnants of past jobs.
No color, no real design, just texture and the beauty of the whole cloth are leading me into my very first real quilt....I think. Or maybe...it's just me sewing nothing, just experimenting with the old fabric and trying to figure out what new sewing skills I can learn - all by myself. Either way - I can't stop. I find myself heading down to the garage (soon to be called the sewing room) to sit for an hour or two.

Do I prefer thread that matches the cloth or am I always going to use Gutterman Red 221? Why does that rotary blade have to be so damn sharp? Yikes - I've been nursing a deep knuckle cut since Sunday. I already have regrets - I wish I had invested in the 8" dress maker shears - instead of the featherweights. But no matter, I am a Gingher fan and I'll make do - I guess I should have mentioned to the woman at the counter that I am cutting through layers of old hemp sheets - not cotton.
Then, I ripped apart some old toile and redesigned it in small patches - and in doing so, I found a new craft. When I told all of this to JZ and Sofia and mentioned that I could go on like this - freestyle sewing forever - Sofia cooly said - "Yeah, so when you get bored - you'll try an actual pattern."
Oh - is that what happens?
Posted by Kaari Marie

It's way better to do your own thing...I've always made quilts using other people's patterns and I've always regretted not just feeling free enough to do my own thing, so keep doing what you're doing - it sounds fun!

Welcome to the addictive world of patchwork, you'll never be the same again! The endless combinations of simple shapes and colour are a constant delight, added to the buzz of personal creativity... the perfect passtime :)

I can think of nothing more relaxing than sitting at the sewing machine designing your own creative ideas! I can't wait to see your finished quilt!

Geese Louise, you started! Are you seriously going to make it up as you go?

kaari, I love your style-- cut and go--just watch the rotary cutter. Can not wait to see the progresss!

Molly, you can do this, too!

I'm so excited for you! Your fabric line and your vintage fabrics are glorious, pure inspiration. Who needs a pattern? The rotary cutter is tough to use with the hand wovens. They do sell a mesh kind of glove that protects your hand. Hope its healing quickly!

Letting your own choices guide what you make is the best feeling in the world. Why restrict your view to what you see through a window when you can step outside and let your steps take you wherever you fancy?

And (ahem..) with the precut fabric bundles from terrific designers like yourself, it's never been faster and easier. Love those jellyrolls!

Thanks for all the beauty!