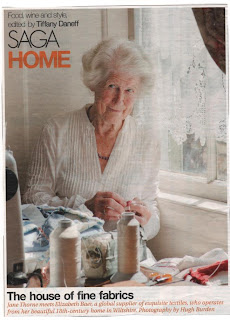 This is a photograph of my favorite frugal friend - Elizabeth Baer - or Buff to those of you who can say they have been in her cellar! For the past ten years, Buff has been teaching me the importance of saving every scrap of antique fabric that falls into my hands.  I love this picture, because it shows Buff doing one of her favorite things - sewing with the fragile bits and pieces.


Here's how I imagine it:
On one of her many buying trips to France, Buff finds an abandoned 18th century chateau.  After finding the linen sheets in the armoires, Buff spots a pair of chateau curtains in the grand room that had been hanging for over 200 years.  Partially bleached and badly weathered,  Buff cuts down the panels and returns to her home in Bath.  She cuts the panels into 16 equal pieces and creates elegant chair covers for her 16 dining room chairs. With the extra scraps she either sews a patchwork dog bed or a set of curtain swags for her granddaughter's room on the third floor of her 18th century Georgian home.

Buff's whole home, including the four large wine vaults in the cellar are filled with her handiwork and collected French textiles.  Well known decorators, actors and editors flock to her home regularly to pick up the latest 17th century hemp sheets, embroidered curtains and hand-blocked fabrics.  Buff and her husband Derek, 93 years young, travel back and forth between England and France to find the best of France profound - the rural life of France. 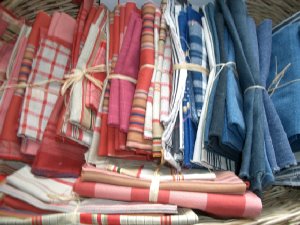 My mom originally found Buff for me - she sent me an article in a old issue of Victoria Magazine, which featured Buff and her piles of ticking that she had uncovered in an old barn in France.  The Queen of Ticking they called her!  The next time Molly and I were headed to London to shop the flea markets, we called on Buff, who immediately invited us both down to Bath to stay the night.  After being picked up at the train station and brought home to her estate, we were shown to the vaulted cellar rooms - where I thought I had died and gone to heaven.  Room after room after room was filled to the beams with piles of hemp, linen and even thistle.  We sat and enjoyed tea and crumpets in the cellar until I could no longer contain myself - I had to start unfolding, touching and smelling the fabric.  I wanted to remember all of the fine details about each piece - not knowing if I would ever return.  Many of the ticking we have designed for Moda have come from this very first visit to Buff's. Years later, I have not only returned to visit Buff and Derek, but have become good friends with them and treasure every visit.  I am way overdue for another visit and have to make the trek soon - to learn a handful of new ideas - she is a wealth of information on all things textile related.  I would love to plan a group tour of the area with visits to Buff, The American Museum in Bath, Christine from Cabbages and Roses and my old friend Polly Lyster, a master natural dyer.  Anyone want to go to Bath?

A quick look at Buff's blog and I noticed a patchwork of posts with titles like: Embroiders Follow the Thread, Linen is for Life, A Fling in France, Kelsches are in Fashion, France is Only a Long Swim Away and Stains on the Characters.  Enjoy!

I want to go! It sounds amazing

I remember that feature in Victoria!!

I visit fabric fairs organised by Elizabeth Bear at various venues in the West Country, including her new home in Bradford on Avon. The last one I visited was held this September at The American Museum in Bath. It is a good opportunity to find the unusual and different, and I never return home empty handed :)

Oh yes!! I was in Bath for the first time about 4 years ago and was enchanted!! So Bath with fabrics, tea and crumpets sounds like heaven to me! When can we go??

Any one want to go to Bath? You need to ask? A resounding "yes!"

I know you were in material heaven

you are so lucky to get that experience

I read that atricle also

Dude. Let's go in the fall next year, I'm in

Well, after wiping the drool off my monitor, I have to say, when do we go?

Count me in too Kaari. I would love to go - so just let me know what the trip will be. Sounds enchanting!

Oh my, I do hope I can go. Please let us know the details as you make them. I love England and I have been to Bath at least twice and Bradford on Avon at least once. The 1990s were my England decade, my last trip being in 2001. I usually came home with vintage linens and/or silverplate. Such wonderful memories. Thanks for the invitation!

I've been to Bath, in the days when I was sent there as a travel writer. Needless to say, I loved the place. A pity I didn't know about Buff -- she would have ended up in my article.
I'll come with you any day!!

Thank you, Kaari, for daring this wonderful story that proves that textile dreams can come true. I woul go any day!

Hi I am one of Buff's "babes" we do all the T for T shows with her.
I am also a big fan of yours so that makes a tidy circle . I always long to come on one of your chateau workshops, off to France Friday can't wait.Linda

Do let me know if you go to Bath - I live in Dorset, which is only about an hour and a half away, and I would love to meet you all! Dorset is also very beautiful, by the way ...