When I first moved to New York, back in 1988, I found myself working for a Japanese public relations firm, located on Park Avenue South - just south of 23rd Street. Other than learning all about Sushi and Kitaro, the real excitement was hitting up all of the neighborhood thrift shops on my lunch hour. There were two in particular - right off of Gramercy Park - that always had something fabulous that I would cart home after work. Furniture, paintings, dinnerware and silver - I trained my eye to see past the junk and focus in on the pieces that were overlooked because they were too dirty or maybe had a chip here or there. Eventually I was able to furnish our whole apartment on 20th Street with thrift shop finds and maybe a dumpster dive or two.
I haven't been serious thrift shopping in a very long time - that is until this week. I decided to start checking in again - to see what I was missing - just in case. I printed off a list of thrift shops between here and Burbank and started dropping in. At first, I was taken aback by the musty old smells - and the layer of dirt that seemed to be on everything. But soon, I was right back in it - and I remembered how much fun I had when I would finally spot something that everyone else had missed. 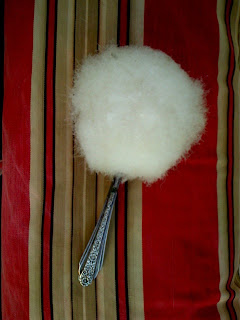 This make-do powder puff was hidden amongst the flatware in the glass case. When I saw the puff, I asked to see it and the lady behind the counter told me that it had been there for years - nobody knew what it was. It was marked $5.00 but she would sell it to me for $2.50. Just for the sheer strangeness of it - I bought it. A make-do powder puff - who knew? Someone actually took a handle of an old spoon and glued on a piece of sheepskin, and then used it as a puff. It has a very faint smell of powder and is as soft as a baby lamb. It's not what I was looking for - but it seemed to need a home.
I'm not sure if I will take up "thrifting" again, but I think I will start collecting make-do's - pieces made when people had to make-do.
Posted by Kaari Marie

dude, welcome back to the land of thrifting! mom and i just hit up community thrift today and found things for you...but ended up buying only things for us. whoops!

you know I want a copy of that list!

It's an ingenious make-do powder puff.
:)