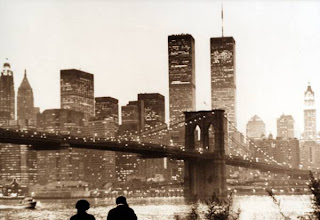 Seven years ago, we lived on Charlton Street in New York, just blocks north of Canal Street. Sofia was in pre-school, Jon was on his way to work on Fifth Avenue and I was getting ready to walk over to French General on Crosby Street. Looking out the window from the 11th floor, I realized something had happened downtown. Jon and Sofia returned within the hour and we all spent the day looking out our windows facing the southern tip of Manhattan. Around 4:00 in the afternoon I remember seeing hundreds and hundreds of pick-up trucks headed south on 6th Avenue. We finally left our apartment and walked towards Canal Street - Sofia riding on Jon's shoulders. We were overwhelmed by the amount of missing person flyers, the dust and debris traveling through the streets, and the flag's that were immediately being flown everywhere. By midnight that night, the volunteer trucks began driving south towards Tribeca. For weeks afterwards, we would hear an ambulance screaming up 6th Avenue towards St. Vincent's Hospital, and we always said a silent prayer that someone had survived. Our lives in New York changed that day, as it did for every person that lived on the island. Through the loss, New York became a compassionate neighborhood community. I will always be grateful for living in New York those days and years afterwards, it taught me everything I needed to know about life.
Posted by Kaari Marie

My Goodness i had no idea you were living in NYC that year....what a life-changing experience indeed.
My closest female cousin was working at Deloitte in one of the towers. I spoke with her the day before as she was boarding a plane to Florida for a last-minute business trip which she was mad she had to make (it would take her away from her young son). She was complaining to me about having to leave NYC and also saying how she could never live in CA because she couldn't live with earthquakes. 8 hrs later and she was in a church kneeling on a pew thanking her Guardian Angel....
(Her family in NYC were unharmed.)

When your store French General New York was featured in a magazine..all those years ago..I pulled out the pages to save cause what a fantastic store..with your sister I believe. I am going now to find those pages. I forgot what magazine your were in - I only save my favorite pictures anymore...magazine overload - but I know just where it is in the store as I love to peek now and then. Judy