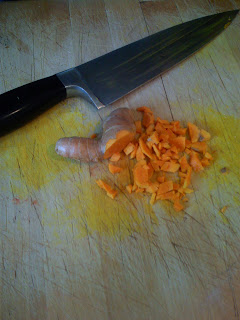 Did I mention that Sofia received First Prize for her science fair entry this year?!  Dying Fabric with Natural Plants was an ingenious idea - if I do say so myself - and Sofia took hold of the reins from the get-go.  First she picked out the fabric - I convinced her that using 19th century hemp would make this project more organic - she agreed.  Choosing the plants was easy - she had seen the way the turmeric root stained my hands yellow every time I was cooking with it.  Beets were on the list - that was a no brainer.  Then, just to see what would happen, she chose blackberries, coffee and spinach.  She boiled 1/2 cup of each of the ingredients in a vat of three cups of water to make the dye bath.  She dropped in three pieces of 4x4 hemp to each bath. 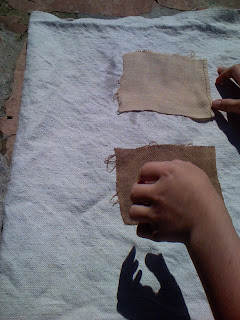 After one hour, she took out a piece of fabric from each pot - and continued removing fabric squares after one day and then finally, three days.  Sofia kept a log of what happened throughout the experiment: the state of the plants as they were cooking (beets loose all of their color) and how the fabric looked once it had dried.  At the end of the three days, she had created a very natural color palette out of each of the plants.  We were surprised to learn the the turmeric and beets gave off the least amount of color and the blackberries and coffee gave off the most.
Since she (we?) won first prize at her school, she was invited to go to the Los Angeles Science Fair and compete with over 400 middle school students.  In her category, applied science, she received honorable mention!  Not bad - not bad at all!
Posted by Kaari Marie

i love the tempered, "we?"
classic!

Well done Sofia! you will soon beat your mother and I hope you will send us a scan of your isploma so that we can see it - what will you do with your scraps and did it all stain your hands as well as the hemp? love to you and Mum. Buff.

My daughter (and I) also did a dye project for the science fair!! I love your angle on the process... with the flight of time in the dye bath. Our "problem" was the mordant and it's effect of the resulting color. Super fun, and I am a huge fan of the onion skin rust. Very cool!!