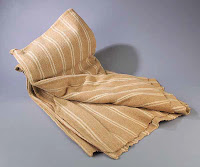 Five years ago, we moved from New York to Los Angeles. We packed up a large car and drove from Memphis to New Orleans to Galveston to Odessa to Santa Fe to Prescott to Palm Springs and finally pulled into Hollywood. Along the way I collected two things: Acadian Weavings and Ganado Rugs.
The Acadianas, early French settlers in Maine, moved south to Louisiana in the 18th century and brought traditional spinning and weaving skills with them. The Cajun's (as they are known now) preferred to work with the cotton fibers as opposed to the wool due to the warm climate.

Most brown cotton covers were picked, carded, spun and woven by a small group of woman - usually within the same house. We stayed at a wonderful, old plantation called Bois des Chenes where the armoires were filled with early primitive weavings from the surrounding areas. I learned all about these old weavings as well as the indigo that was planted nearby and used for the decorative stripes in some of the covers.

In Ganado, Arizona we happened upon the Hubbell Trading Post, 55 miles northwest of Gallup, New Mexico, on the Navajo Indian Reservation. 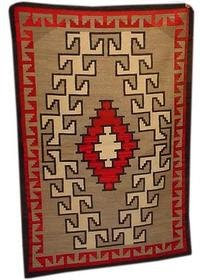 Opened in 1876 by John Hubbell, this was one of the original Indian trading posts for the Navajo's. He provided his Navajo customers with merchandise and food, while promoting Navajo arts and crafts to the remainder of the country. 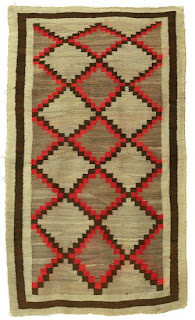 Walking inside of this original trading post was like stepping back in time. I was overwhelmed by all of the antique and new weavings that were strewn about the rooms from floor to ceiling. I dug for a Ganado rug that I could afford and eventually found a beauty. I continued to look for these specialized weavings and found a few more on our drive through Arizona. The Ganado weavings are usually dominated by the color red and often have a geometric element along the border.
Although I collect French florals and tickings for French General - my heart belongs to the natural dyed weavings that were produced in America in the 18th and 19th century by the indigenous people and original settlers.

Picked my hair. Got carded at the bar. Spun out of control. Some crazy Woven plays "angel" music in the Powell street Muni station...

OMG! I've been to Hubbell Trading Post. I drove cross country with a friend re-locating from east to west. We stopped at HTP because her father was a National Park ranger there when she was a child. What a great little place!