Dance With A Stranger

When I moved to London, back in 1984, I escaped my job working for a representative of the House of Commons (wife!) - who smoked more cigarettes than I thought humanely possible - and took the tube to an old theater in Hampstead Heath. I was curious about a movie that was playing called Dance With a Stranger. 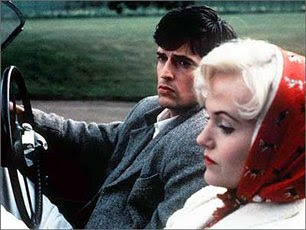 Starring Miranda Richardson and Rupert Everett, the film was based on the true story of Ruth Ellis, the last woman hanged in Britain. Mike Newell's film concentrates on Ruth's short-lived relationship with motor-racing driver David Blakely, who she ultimately murders. I became obsessed. I loved this movie.  This is one of those films you can watch over and over.
According to screenonline, "Several film noir techniques are used to enhance the film's melancholic bleakness. Characters emerge from shadows, and are often photographed from unusual angles. The lighting is usually subdued, making colors appear surreal.  Much is made of Ellis's inability to see - she constantly needs to put her glasses on, but refuses, out of vanity, to wear them. Her blindness is a metaphor for her desire, which masks the reality of her situation."
If you can find it, I highly recommend it - just be prepared for the insanity.
Posted by Kaari Marie