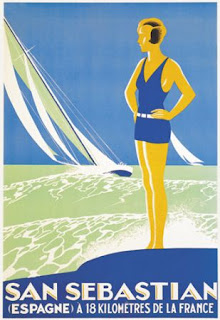 Every summer, my family and I visit my husband's family in San Sebastian - located on the Basque coast in northwest Spain. Lazy days on the beach, grilled sardines and cidre for lunch and late night tapas in the old part of town.
For many years, it took me a while to get used to this slow-paced life. I would arrive and want to go, see, do - and then it hit me - you don't go, see, do in San Sebastian. You walk along the promenade and run in to relatives you haven't seen in 12 years, you pick up fresh baguettes at noon, before the panaderia closes and you shop la Parte Vieja for espadrilles.
One summer, I was determined to find something exciting to do in San Sebastian. We walked up to the old Palacio de Aiete, an old home constructed by the Duke of Bailen in 1878. The palace became the summer home of King Alphonso XIII and his queen Maria Cristina until their own home, Palacio de Miramar was completed. From 1940-1975, Franco used the palace as his summer home. 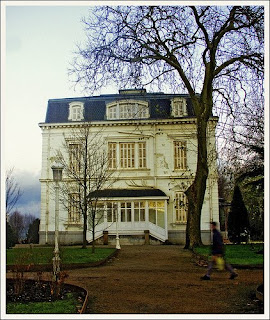 Although closed to the public, we arrived to find a young boy outside the side entrance and asked if we could go inside. He explained to us in Spanish that there was a movie being filmed inside the palace and he had been hired to keep watch over the home from 6pm till 6am. I pleaded, begged and almost bribed him. He eventually said ok - I could go in, while Jon Z. kept him busy in conversation. I immediately ran up the grand staircase to the bedrooms - I wanted to see what the beds and linens were like. I was blown away. Nothing - nothing had been touched since Franco had departed 30 years earlier. It was as if the whole house had been boarded up and preserved. The liquor cabinet was fully stocked with old wine and cognac - I half expected to see a smoking cigar. Eventually I was called downstairs when the young boy got nervous - he probably thought I was looting the place. I don't think he would have believed me if I had told him, all I really wanted to see were the sheets!
Posted by Kaari Marie

It sounds like a great excursion! I'm guessing you didn't have a camera with you since you didn't post any photos. (Something I would do, fail to have my camera for such an experience)
Sher

What a beautiful home! I loved your story. I need that to be MY summer home. Your time in Spain sounds wonderful. We could all use more time to slow down and just be.

why are the truest things
some
times
the last to be believed?

if there had been
a young GIRL
guarding the house,
SAY ME {!}
on your approach
i would have said: