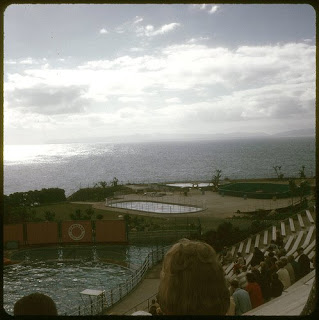 When I was 16 years old, I was lucky enough to get a job at our local marine park, Marineland of the Pacific.
Located at the tip of the beautiful Palos Verdes Peninsula in Los Angeles County, California, it was the largest oceanarium in the world. Opened in 1954, five million dollars were invested in the project to make it the most unusual cultural, educational and entertainment center on the Pacific Coast.
Every morning throughout the summer of 1981, I would ride my moped down the hill to the home of Shamu and Corky, the killer whales. I escorted "personalities" around the park (I remember Dustin Hoffman and his kids), collected tickets at the dolphin show and worked at the customer relations counter. Even back then, I thought it was a pretty cool job. Marineland closed down in the early nineties and shipped off the family of whales, dolphins and sea lions to Seaworld in San Diego. I still look out from my parents kitchen window when I am home and miss seeing where I used to work.
Posted by Kaari Marie

So what happened to the Marineland property? I started school in Westchester near LAX - a great little family neighborhood and we used to go to Marineland...good memories
Vicki K