This morning Dawn and I were working at the shop and a roll, like a wave, came over us. I knew it was the real thing - and I hadn't been in one since I was a kid in 1971. I yelled "Earthquake!!" and ran to save the large glass apothecary jars that sit on the top shelves in the notion room. Holding on to at least four large jars, I thought, &;#%@#(&;@$! I didn't think the Quakehold would hold everything....all of the glass jars filled with beads, old flowers and stamens and...I panicked. 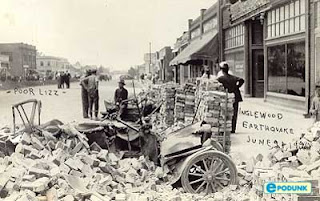 My second reaction was to yell out and see if Dawn was ok - but she didn't answer. She had already run outside and was yelling for me to get out of the house. What a rush! When we got outside we saw hundreds of construction guys in bright orange shirts racing down the emergency steps of the soon to be finished W Hotel at Hollywood and Vine. The foreman was yelling - "Everybody Down!!!!"  They were back to work within the hour and none of us felt any of the aftershocks.
I hope podunk doesn't mind if I borrow this picture, but I can imagine how these guys felt after a bit of a rumble in LA -- thankful they were ok and then a peaceful minute.
Posted by Kaari Marie

everyone runs out to save their life,
you run over
to save breads and such!

isn't that the way
with the little things we love!

you were saving your heart's desire,
your glass and floral babies...

{{ you were most fortunate;
may you always be such }}

I don't know, I think "buried under a ginormous pile of beads and notions" sounds like a pretty good way to go if you ask me... ;-)