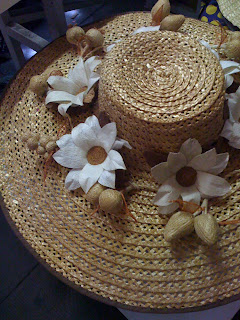 We had a bit of a leisurely sleep in this morning - had a wonderful breakfast out on the patio and then retreated out to Lizzie's craft room - an open space with natural light which she has built in the barn adjacent to the coach house. After looking through our craft bags, we decided to give wool felting a try first. Ever since I took a class at Reform School in Silverlake, I have been hooked! I filled everyone's bag with natural dyed alpaca wool roving - and gave everyone a quick warning about the needles. Before I knew it, everyone was creating a small beauty - without too many needle stab sighs! A local lunch filled with pates, cheese and fruit - and a spot of local wine.
After lunch we headed over to Septfond where we visited Chapeau Willys - one of the oldest hat factories in the areas. Since the factory was over 200 years old, I started looking around for the old stuff. I looked and looked and couldn't find any trace of the old flowers or straw or stamens or ribbon - where were they hiding it?? Eventually in my very bad French, I asked the owner, Isabella where the "old stuff" was and she told me the sad story of how about four years ago there was a robbery and then a fire and the fire had wiped out the fingerprints so there was no way of knowing who robbed the building. Tragic! I looked down on her desk and noticed piles of old spools of ribbon and flowers and wondered if she would part with a few. Without a beat, she told me that this was all that was left and they were her memories of the past - she wouldn't part with one - and I understood why. 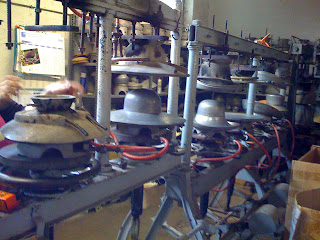 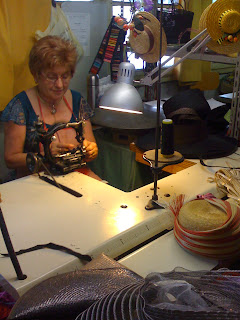 We took a fascinating tour of the factory and learned about the production of the panama hat as well as Willy's specialty, the braided straw hat. Cathy spotted a vintage straw hat hanging on the wall and was dead set on buying it - but alas, Isabella wouldn't part with anything that was made before the fire. So....she offered to make Cathy a hat just like the old straw hat hanging on the wall. We all got so involved with designing the hat - from the color of the straw, the grosgrain ribbon around the brim and the vintage washed out flowers for a spot of color - before we knew it we had been at the factory for almost three hours! It was a fascinating day!
Posted by Kaari Marie